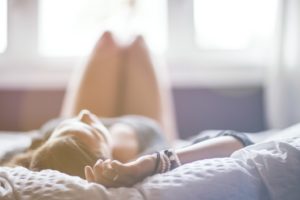 My daughter is 3 and she still doesn’t sleep well. This is a present tense struggle, but we have come a long way. Sleep deprivation, to some degree, can’t be avoided when you have a baby. Recently I thought about how the different levels of sleep deprivation have affected my life. Immediately, the 5 stages of grief came to mind, which were first identified and defined by Elisabeth Kubler-Ross. I decided to use the 5 stages of grief because they really deal with any type of loss. Sleep deprivation is not only a physical strain, but a mental one too. I have definitely grieved and missed sleep in my life, since the birth of my daughter.

Most of this stage took place while I was pregnant. I told a coworker that between college all nighters and my stressful (but fun) summer job that I worked at for 9 summers, I was familiar with sleep deprivation. She laughed and said, “just wait.” At the time, it kind of annoyed me. I felt like there was some secret people were keeping from me. As soon as my daughter made her entrance in the world, I understood what she meant. I still believed I had some control though, which is when the real denial began. It seemed reasonable to put a time frame on my sleep deprivation and hold my daughter’s sleep patterns to an invisible standard. I didn’t want to believe that this could go on for years, so I chose to believe my daughter would just magically sleep one day.

When my daughter was a couple of months old, she only took 30-minute naps. After putting her down for her nap and breathing a sigh of relief, I would glare at her for a couple of seconds when she woke up bright eyed and bushy tailed 30 minutes later. I was angry at her for not figuring out this sleeping thing like I wanted her to and also angry at people who were sleeping. I was constantly on edge from the lack of sleep and most likely not thinking clearly most of the time. If anyone asked the simplest thing of me, I just didn’t have the energy to deal with it.

This stage didn’t last long, but it definitely made its mark. One morning when my daughter woke up for the thousandth time to breastfeed, I slurred, “please God if you’re going to take me just take me now!” I’ve never known exhaustion like what I experienced after my daughter was born. Besides bargaining my life, I would also say things like, “well maybe this is karma for something I did.” I would try to think of anything bad I had ever done and apologize profusely. I promised to be a better person if the universe could please somehow get my child to sleep for the love of God. This was probably the most dramatic stage of all the 5.

This stage lasted the longest. I struggled with postpartum depression. There were times when I questioned if it was the sleep deprivation or postpartum depression making me miserable. I believe they overlapped, which is why most people told me that I needed more sleep to feel better. I agreed, but I also had a baby who breastfed on demand 24-hours a day. It was hard for me to figure out how to get more sleep when I also felt an obligation to my daughter to comfort and nourish her.

I think this came somewhere close to my daughter’s second birthday. I stopped comparing my daughter to the other babies who slept 12-hours every night since they were 3-months-old. Or the babies who slept like angels after completing sleep training successfully. I also stopped comparing myself to the “good moms” who just had this sleep thing figured out and created the best environment for their child to sleep. I stopped comparing myself to the moms who had help with their kids so that they could get some sleep even when their child wasn’t sleeping. Somewhere along the way, I accepted that my child is crazy and stubborn and wild. I love that about her, even when it makes my life more difficult. She is a true force of nature.

Acceptance for me also equaled surrender. I surrendered to my daughter’s truth and my family’s truth. Since day one, my daughter has been curious and fascinated about the world. She doesn’t want to miss a single second. Our family’s truth right now is that we don’t sleep. Once I accepted that, I learned how to work with it better. I’m still tired. I still get angry sometimes and depressed. I still wish I could sleep more, but I’m not fighting my tiredness anymore. I’m learning how to live with it.

That being said, I’m not crazy. If my daughter starts sleeping, I am not going to stop her.

So universe, if you’re listening, help a sister out. I promise I won’t forget to recycle ever again!