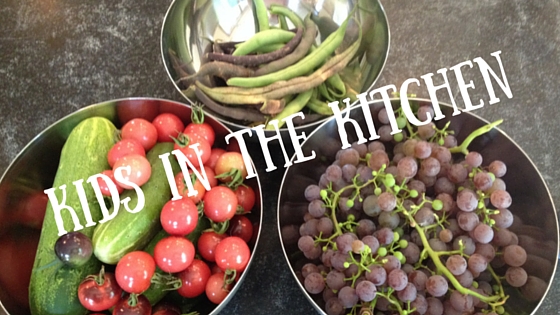 I will be the first to admit that I am no expert on kids, but from what I can tell, I do have a kid who is a more adventurous eater than average. At least that’s what my friends tell me! I don’t think this has to do with genetics, but instead has to do with all the food to which he is exposed. But, it also has to do with getting him really involved in cooking!

I have found that his favorite activity tends to be chopping… which can be a bit scary since knives aren’t something we normally hand to a two-year-old. We bought a wavy chopper that allows him to hold the knife far away from the blade (which is also not super sharp) so that he can be involved in helping us as a little sous chef. The main thing is finding recipes that don’t require all chops be the same size (since they won’t be). I also work to coach him to slowly place the knife where he thinks it should go and evaluate whether the size of what he is chopping is “about right,” before he slices through. Typically he’s not all that patient, so I usually hear “too small!” or “too big!” after he’s already chopped. I also make sure he knows to keep his other hand out of the way when cutting, but, after that, I mostly set him free and watch to be sure no fingers get in the way. 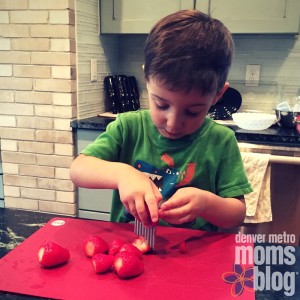 I use his love of chopping food to my benefit! Typically anything he has helped prepare, he is much more willing to eat. We do a CSA (Community Supported Agriculture) share from a local farm (Berry Patch Farms) and last night I had about 3 heads of lettuce in the fridge. I’ve been avoiding using them since, well, how many toddlers do you know that want to eat a big salad full of lettuce? He likes lettuce ok (mostly because he’s seen the gorillas at the zoo eat it and he’s interested in being a gorilla) and will usually eat one or two small pieces just because we ask him to, but last night he got to help chop and prepare the salad:

1) I bought some fresh ripe strawberries to add a little bit of sweetness to the salad and be a “reward” for eating it. I allowed him to chop the strawberries and just gave him a general idea of how big to make them. No big deal if they were bigger or smaller.

2) I peeled some cucumbers and sliced them in half lengthwise. He then cut each half into pieces. Again, it didn’t matter what size they were. 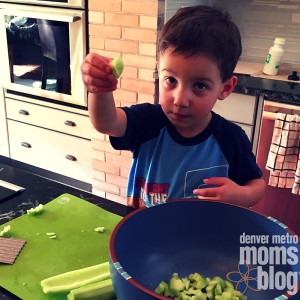 3) I washed the lettuce and he got to help tear the leaves into pieces (what fun!) and help me spin the salad spinner. He talked to his dad about that multiple times at dinner, demonstrating how he turned his arm in circles.

He didn’t like the salad dressing I made (likely because of the vinegar), but after washing that off, he seriously ate about 4-5 small bowls full of salad. He loved it! He kept asking for more. I made sure each time he knew he couldn’t just eat the strawberries (he usually saved them for last), but I was amazed. In fact, when I pulled out leftover ratatouille for lunch today (that he was only partially involved in making), he cried “no! I don’t want that. I want salad!” Where was my video camera when I needed it…

What do you do to get your kids to eat their vegetables? Do you find that getting your kids involved in cooking helps them eat more? What other tips do you have to create a love of veggies in your kids? 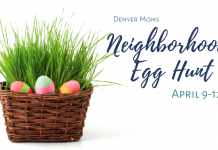