I went to a conference in Boulder in March called “Together, We Grow” with Amanda Steinberg. The event was put on by WINC – Women In Community. Amanda is the founder and CEO of DailyWorth, a finance website for women, which is where I know her from, but she has done lots of other amazing things.

I’ve been a DailyWorth subscriber for years and really respect and admire Amanda. I was a little hesitant about going to the conference, because it would be a long drive during rush hour and I wouldn’t see my girls that night. My husband was supportive though and I thought this might be my one shot to see Amanda in person in a small venue. So, despite my hesitations, I went. And I am so glad I did.

In some ways the conference was what I would expect in Boulder. We started out with a short guided meditation that was to help us “land” in our bodies and be present for the event. Not your typical finance stuff, but that was kind of the theme of the conference – looking at things in a new way.

Amanda told her personal story. She also talked about how the big finance companies kept telling her “women weren’t interested in finance.” She wanted to tell them it’s because they’re not making it interesting for us. The goals and plans they all use don’t work for everybody. Amanda has come up with some different solutions for us.

The event was about so much more than looking at money in a different way though.

The evening wasn’t just about Amanda. It was about sharing stories. Listening. Community. (Which makes sense because obviously, the title, and the event was put on by WINC.)

The sense of community was fostered even more by a panel of 6 women, who are all incredible in their own right. I was surprised that I had never heard of a single one of them. These are women that are doing amazing things in Colorado (and beyond). I had the privilege of hearing their stories and their thoughts. (Stay tuned for another post about them.) 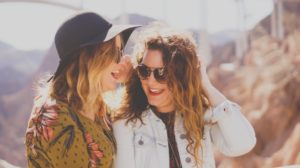 I’m going to be totally honest here, I do not have a lot of friends, nor do I have a great sense of community.

I haven’t found my “tribe.”

Now, I work with a great group of mostly women during the day, I’ve finally started making friends with some of the other moms at daycare, and I became a Denver Metro Mom’s Blog contributor, because I want to be part of that community. But it’s still a relatively new idea for me. I don’t always know how or how much to give.

I’m not great at meeting new people, either. It’s way outside of my comfort zone. Until I get to know someone, I have a hard time opening up. I’ve been working on it a lot in the last year. I’ve been to a couple of DMMB events. I went to a big conference in New York. Obviously I went to this conference in Boulder. I’m still not great at small talk or initiating conversations with strangers, but I am putting myself out there.

I’m making an attempt, because I want to be part of a community. I love the feeling when I’m surrounded by a community of supportive women. To be in a place where it’s not about criticism or judgement, it’s about lifting up and believing in each other.

I really started finding my community online. That’s where I first saw just how much impact a supportive community can have on me. They helped me work through my fears, start to believe in myself, and make strides to live the life I want to live. And in return, I saw how much positive impact I can have on other people. At a meetup in New York, someone came just to meet me! I had made such an impact by being my vulnerable, emotional self that he wanted to meet me in person when he had the chance.

You see, I’m actually a very emotional person. Some would even say an HSP. Most people just don’t see that in me, because it takes me some time to open up. I mean my family knows, but not everyone does. I get emotional when I talk about the big stuff. The important stuff. The stuff most people don’t talk about.

So I love seeing that in our backyard, here in Denver and around the state, there are communities of amazing, strong, brave women who are trying to do things differently. Who are leading different lives, taking different paths, but most importantly supporting other women in such an amazing way.

Four years into motherhood, I’m looking for more. I want to be better – at so many things. I’m trying to learn and grow so I can be an amazing role model for my girls. I think community is a big part of that.

It might take awhile to find your community, but know that there are women out there that believe in you and want to support you. You can find them. You are unique and amazing. And if, like me, you need someone else to see that in you, to remind you, that’s ok too.

Mom’s Weekend Away: Tips For Planning a Girls’ Trip

Friendship Lessons: What I Want My Children To Know