Having been a new mom twice now, I have a lot to say about this topic. Thankfully, I’ve learned about all the things moms wish they had known before bringing home baby. My youngest was born two months ago, and I feel very fortunate to have a close-knit group of friends who did every single thing on this list. It’s true that it takes a village to raise a child and I’ve got a freezer full of casseroles made by friends, family, and caring neighbors to prove it. 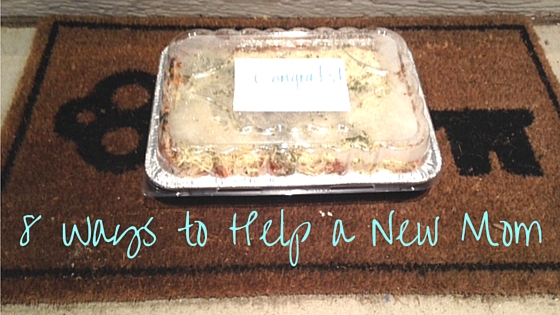 If you have kids of your own, you probably already know how best to help a new mom because you know what it’s like to have a newborn, but just in case you’re like me and try to block out those first few months, here are some ideas for lending a hand to those who have recently birthed a tiny human.

In my opinion, this is the best way to help a new mom. And the easiest. After a long day of changing diapers and wrestling swaddling blankets, the last thing a new mom (or any mom for that matter) wants to do is cook. One of my friends organized a meal train for me through mealtrain.com several weeks before Scout was born, and it was the best feeling in the world to know that a hot, delicious meal would be brought to me at the end of each day. I didn’t have to cook for at least two weeks. Don’t tell my husband, but meal trains are the main reason I want a third child.

2. Drop Food at the Door

If you are generous enough to bring a hot meal to a new mom, go a step further and drop it on her doorstep. That’s right, don’t even set food in her house. I know you’re dying to hold the new baby and smell that new baby smell, but if your friend is anything like me, the last thing she wants to do is entertain a guest, because even if you don’t care that she hasn’t washed her hair in five days and her house looks like an episode of Hoarders, she might. I remember when Rory was born, everyone wanted to stop by and see her, and I dreaded every single visit, even those from my closest friends. I was exhausted and hormonal and just wanted to be left alone with my new baby for awhile, but I didn’t feel comfortable telling people that, so I endured the visits and counted down the minutes until I could put my sweat pants back on. Although I appreciated the food and well wishes, what I really wanted most was to bond with my baby and not have to worry about hiding milk stains or brushing my teeth.

3. Don’t Bring Your Young (Germy) Children Around the New Baby

This one is big for me because I’m both a germaphobe and a hypochondriac. I am that mom that wipes down the high chair with Clorox wipes and keeps hand sanitizer readily available. I’m not quite sure what I was thinking having both of my children during the height of flu season, but I was militant about making sure that people washed their hands before holding my newborn, and unlike those diaper commercials suggest, that didn’t change with the birth of my second daughter. Consider this my PSA: If you must bring your small children around a newborn baby, make sure they stand at least ten feet away at all times and don’t let them touch anything. Or breathe. Basically, they become statues. Because let’s be honest, children are gross. They pick their noses, stick their hands down their pants, and play in the toilet, and if they go to school or daycare, they spend a lot of time with other gross children. They have no business hanging around a newborn. So, give a new mom one less thing to stress about and keep them at home.

When Scout was born, we had several friends visit us at the hospital, and all came bearing gifts. My husband made the observation that those with more than one child of their own knew the importance of bringing both Scout and Rory a present. Of course everyone brought Scout a gift because she was the star attraction, but let’s face it, she wasn’t really old enough to appreciate the cute outfits and stuffed animals, (she wasn’t even aware she had hands yet) but Rory, who was already feeling jealous and left out just hours into her role of big sister, was old enough to appreciate a gift and they helped her realize that maybe being a big sister wasn’t such a bummer after all. Plus, these gifts kept her busy during a period when I desperately needed her to be kept busy.

New moms need to hear how amazing they are. (All women do!) For many moms, the newborn phase can be a difficult, dark period. They’re exhausted, hormonal, and adjusting to a new life. It’s no wonder that so many moms develop post-partum depression or baby blues. I had one friend in particular who sent me several encouraging texts in the first weeks after Scout’s birth. They were so uplifting and seemed to come exactly when I needed them. Just hearing someone say that I’m a good mother and doing a great job was enough to give me a much needed confidence boost. Kind words are like caffeine for the soul: they keep you going.

6. Be Generous with Your Own Horror Stories

It’s true that misery loves company. Words of support and encouragement are important to a new mom, but it’s also nice to hear someone say that you’re not alone in your struggle to get out of the house in clean clothes and brushed teeth. When Scout was four weeks old, a neighbor came over for coffee, and it wasn’t the relaxing visit I had imagined it would be. Rory threw a fit because she wanted a snack ten minutes before lunch and Scout cried the entire time. Later, I texted her to apologize for the scene, and she told me that I was doing ten times better than she was when her kids were that age. Bless you for not making me feel like the worst mother on the planet. Another friend described the first few months with two children as “pretty miserable” when I hinted that life with two was difficult. Thank you for saying exactly what I was thinking.

Unless you’re Giselle Bundchen (who obviously isn’t human), it takes awhile after giving birth for a new mom to feel like your best self. That pregnancy glow is quickly replaced with dark circles and greasy hair, and you most likely still look five months pregnant weeks after giving birth. When someone took the time to compliment me the first few months after giving birth to my daughters (even when if it was obviously a lie), it boosted my self-confidence for days. One mom couldn’t seem to believe that I had a three week old. “You don’t even look tired,” she said. I almost hugged her right in the middle of the cereal aisle.

8. Set an Actual Date and Time to Help

In the weeks leading up to the birth of both my girls, almost everyone said something to the effect of, “let me know if you need anything,” but very few people actually came to my house and asked, “What can I do?” It’s true that actions speak louder than words. Most people, don’t feel comfortable asking for help. New moms feel that they should be able to do it all and they feel like failures when things don’t turn out the way they imagined. One friend in particular continued to offer her help in the weeks and months after Scout’s birth. She insisted that I let her take Rory for a few hours so I could get some rest. She offered to grocery shop for me, and even made me breakfast on several occasions. It’s difficult for me to accept help, but she refused to take no for an answer, and I’m glad she did.

What was the most helpful thing someone did for you when you were a new mom? What would you add to our list? Tell us!