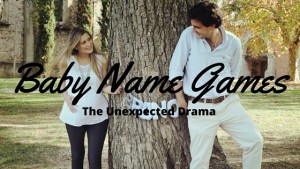 As soon as I found out I was pregnant, I started thinking of names. I googled baby name sites and checked meanings to see what I liked. The only criteria we had was that we wanted the baby to have a name that started with the letter “E” after my dad’s first name, Edward, or the letter “C” after my dad’s middle name, Conway. Because my dad is no longer with us, I thought it would be a simple and nice tribute to him.

I expected people to have an opinion on the baby name we picked, but I wasn’t prepared for all of the unsolicited feedback. Everyone from family members to friends to coworkers had an opinion on the names my husband and I considered.

About halfway through my pregnancy, I thought back to a conversation I had with one of my pregnant friends when I first found out I was pregnant. When I asked her what they were going to name her daughter a couple of weeks before she was due, my friend told me that they were waiting to reveal the name until she was born. I thought it was a cute idea, but didn’t really get it. Doesn’t everyone talk about what they are going to name their child before they’re born? I thought talking about the names of your unborn children was par for the course.

At the time of this conversation, I was newly pregnant and blissfully unaware of the politics involved in naming a baby. I was still operating under the assumption that when people asked what names we were thinking of, they would smile and say, “how sweet,” no matter what came out of my mouth, because… manners. I soon found out that, at least for me, that was wishful thinking.

I had my heart set on a girl name that I had heard years ago. It wasn’t super trendy, had a beautiful meaning, and it sounded nice with our last name. My husband liked the name too, and I was almost certain that it would be my daughter’s name. When we shared the name with some of our family members, one of them said dismissively that it sounded like a dog’s name. My dream name quickly went to the bottom of the pile and I started brainstorming again.

Because everyone was willing to give us baby name suggestions, even calling us up at odd hours to ask what we thought of a name, I mistakenly subscribed to the idea that the naming of our child was a group process. I cared about our family’s opinions of the name we chose and wanted to please them.

After we started to realize the stress everyone else’s opinions were putting on the decision process, we adopted my friend’s course of action; we stopped telling people the names we were considering. At that point, we had pretty much chosen a name, but we still didn’t want to open ourselves up to the possibility of hearing people’s negative opinions. What was once an open process suddenly became closed.

I can understand how natural it feels for everyone to include themselves in the baby naming process, because it’s so exciting. When my mom was pregnant with my younger sister, I think my parents entertained conversations of a name with me to help get me excited about having a sister. I remember I had lots of opinions and was very vocal about what my parents should name her (they did not pick the middle name I insisted on). Now that I have felt the stress from the parent’s side, I am more thoughtful about not asking people what they are going to name their baby. If their situation is anything like mine, it could be a very loaded question. I have learned there are ways to show you are excited about a baby’s arrival that have nothing to do with asking what it will be named.

Looking back on the whole experience now, it was a great first time parenting lesson.

In fact I might even say it was our first test as parents. In parenting, there is no shortage of opinions. Family, friends, coworkers, and even strangers will all have opinions on what is best for your child and how you should raise them. At the end of the day, parents need to trust themselves to make the best decision for their children, whether you are deciding what to name them or deciding if you should give them macaroni and cheese for the fifth night in a row.

With all of the opinions we were bombarded with, my husband and I were able to find the perfect name for my daughter. I truly can’t imagine her having any other name and if it took the stress of more opinions than I can count to get there, I’ll take it. That being said, if we have another child I am keeping that name under lock and key for the whole pregnancy.

What was your baby name process like? Did you take more of a group approach or just discuss names with your partner?