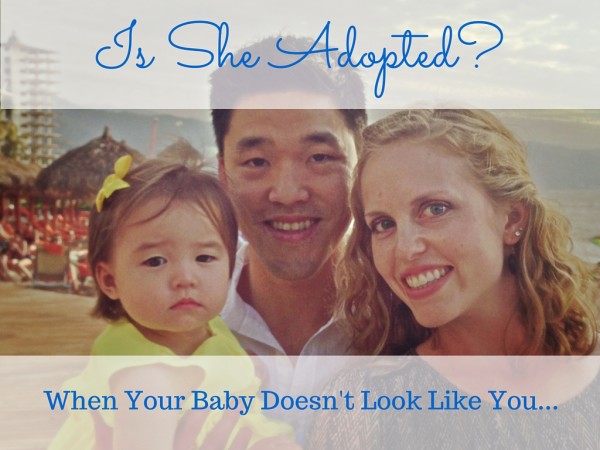 Before I got married, I always imagined my future children would look like me: blonde, curly hair, blue eyes, and pale Irish skin. Of course, that vision changed when I married a Japanese-Brazilian who happens to be my opposite in every possible way. I didn’t mind, though. Who doesn’t love a mixed baby? By the ninth month of pregnancy, I thought I had come to terms with the fact that she wouldn’t look like me, and I figured the least I could do was give her an Irish name.

I didn’t mind until the first time someone asked me the question.

My then five-month-old and I were at the library waiting for story time to start when a woman and her son sat next to us. I could feel her staring at us for a while, but I figured she was judging me for the fact that my baby was still in her pajamas at 10:30 in the morning. Instead, she asked, “Is your daughter adopted?” At first I didn’t realize she was talking to me. I glanced behind me and beside me, but we were the only ones around. And then it hit me: She’s talking to me, and she thinks I adopted my baby from a foreign country. (For the record, I think this question should be grouped into the same category as asking a woman if she’s pregnant: Don’t ask unless you’re 110% sure.)

It takes a lot to offend me, and I could tell that she was just curious, so I told her that “no, she is my biological child who happens to be half-Japanese.”

I didn’t think much of it until it happened again a few weeks later. We were taking our first plane ride to San Francisco to visit my husband’s best friend. I was slightly (okay, really) frazzled about traveling with a baby, and I was so busy praying that we didn’t forget anything, that I almost didn’t hear when the TSA agent remarked, “Aw, what a cute baby. Where is she from? I want to adopt one day.” I just smiled and patiently explained that even though she doesn’t look like me, she did in fact, come from my womb, and asked if he would like to see my scars to prove it? (I still made sure to wish him good luck on his future international adoption. I mean, I’m not a monster.)

The question was asked several more times over the course of my daughter’s first year. I tried not to let it bother me, but the truth is, it did.

I think it’s human nature to want your child to look at least a little bit like you. I think adoption is an amazing thing, and I know that adoptive parents love their children like their own flesh and blood, but my daughter wasn’t adopted. She grew inside of me for nine grueling months. I birthed her and I nursed her for 12 months. She shares half my DNA.

It wasn’t until a new friend told me that Rory reminded her of me that the question stopped bothering me. She didn’t use the words “look like,” but she insisted that there was something about the way Rory spoke and acted that made her certain we were mother and daughter. The more I thought about it, the more I realized that we have a lot in common, after all. Sure, she may not have inherited my wavy blonde hair or my eyes or my skin tone, but she did inherit my love for reading and sour pickles. She sticks out her tongue when she’s super focused on something, just like I do, and she definitely has my sense of rhythm (poor girl). She may not look Irish, but she undoubtedly got my Irish temper (poor me). So, even though physically she may not be my mini-me, she’s still undeniably my daughter, and for me, that’s enough to overshadow the fact that some people may stare at as at the library or the grocery store and assume that she’s not biologically mine.

And every so often when the lighting is just right, she’ll smile a certain way or scrunch her nose just so, and I’ll see myself in her. It doesn’t happen very often, but when it does, I smile and think to myself, “there I am.”

When my second daughter was born a few months ago, I was less surprised to see a head full of straight, black hair. Her eyes may be almond-shaped, but they’re still blue, and perhaps they’ll stay that way. Hey, a mom can hope, can’t she?