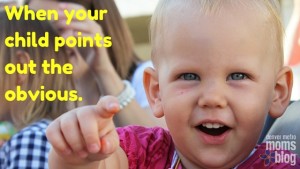 My almost-3-year-old daughter and I were at the grocery store not too long ago, and as we were about to walk out of the store, my daughter declared:

What? You like his what? She points towards a store employee and says again, “I like his BLACK EARS!”

I turned to see what she was talking about and sure enough there was an African American man nearby with… black ears. This was one of the first of many experiences of my daughter pointing out the obvious and beginning to notice differences among people.

Since then – she has asked multiple women (and men) if they have babies in their bellies and once looked up at a tall female friend of mine and said, “You are BIG!” She asked if a young man wearing a black eye patch was a pirate, and most recently she pointed towards an older man using a walker and said, “What IS that?!”

The truth is that I’ve probably got a few years ahead of me filled with many more potentially uncomfortable moments like these and I’ll need to be better prepared to respond. Despite the awkwardness of these situations, I’m realizing that these small moments of innocent candidness provide us with big opportunities to discuss really important concepts with our young children.

Here are a few steps that I plan to implement in these situations in the future, and perhaps you might want to try them, too. Disclaimer – I’ll be the first one to admit that I’ll probably freak out in the heat of the moment and not do any of these things, but hopefully someday I’ll get this practice down!

Our children are still young and can actually get away with saying a lot of things that we as adults wouldn’t think of saying out loud. We can’t control everything that comes out of their mouths. Let’s attempt to embrace these experiences as teachable moments and (quickly) try to move on to Step Two.

2. Acknowledge and respond to the person being noticed.

Depending on the nature and potential impact of what your child has said, take a moment to acknowledge the person your child may have been speaking to or about, if they actually heard them. Perhaps you could use a simple and lighthearted statement such as, “Kids say the funniest things, don’t they?” or “My daughter has never seen someone using a walker before.” The truth is that there may be times when an actual apology is in order, if your child has said something offensive. As parents we tend to jump in and apologize on behalf of our children, but I think it’s important to first tell your child that what they’ve said wasn’t kind and that they should say they are sorry. However, I wouldn’t push this too hard. I’ve watched parents demanding that their child apologize to someone and it gets pretty awkward when the child still won’t apologize after being asked to do so multiple times. Quickly give them the opportunity, but speak up for them if you need to. Also, don’t make the situation more awkward by explaining to your child why what they said may have been offensive in front of the person they have pointed out – take care of that later!

Perhaps your child was just being curious and asking about something that they noticed. If this is the case, it might be appropriate to encourage your child to engage in a conversation with the very person they are noticing. For example, my daughter and I were at a bagel shop one morning and a man came into the store using crutches. My daughter noticed and asked me what was wrong with him. I encouraged her to ask him about his crutches if she wanted to know. She then looked right at him and asked if he was okay, which gave the man the opportunity to respond. By encouraging my daughter to get curious and to bravely engage with someone, it helped to avoid an uncomfortable finger-pointing type of moment.

3. Talk with your child about what happened.

Consider this a great opportunity for your child to learn something new. Maybe it’s a discussion about how their words can impact people or that some people might appear different or unique because of certain physical features or disabilities they may have. With the bagel shop/crutches story above, I later had a private discussion with my daughter about what crutches are and why people sometimes need to use them.

4. Use the experience as a reminder.

We can reference previous “pointing-out-the-obvious” experiences that didn’t go so well in order to help prepare our kids to respond more appropriately in the future. This can be a helpful technique for when you know your child will be somewhere that they may encounter people who seem unique or different to them. (Example – when going to visit someone at a hospital or nursing home.)

I’m obviously not an expert; I’m just a mom who’s been through some of these experiences, but I will end with a quote from someone I consider an expert – Fred Rogers (aka “Mr. Rogers”). He stated, “as different as we are from one another, as unique as each one of us is, we are much more the same than we are different. That may be the most essential message of all, as we help our children grow toward being caring, compassionate, and charitable adults.” He goes on to explain that, “Children take their cues from the adults they love. We help our children respect others in subtle ways – by the way we greet people, talk with them, and talk about them afterwards. Children learn from our example.”

Have you had an experience where your child has pointed out the obvious in a funny or embarrassing way? Were you able to use that experience as a teachable moment? We’d love to hear your story!