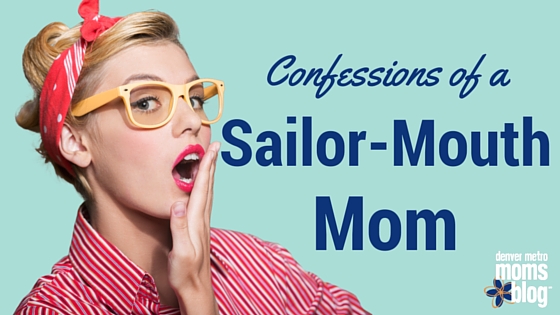 I have a confession to make: I curse – a lot. And sometimes in front of my children.

I don’t drink (much), I’m not a gambler, and I don’t do drugs, so I consider this my one vice. A vice I admittedly didn’t really consider a vice until my daughter began talking.

A few weeks ago, my now very verbal two-year-old hit her head on the kitchen table and the F-word flew out of her mouth like it was no big deal. She said it so casually she may as well have said, “Can I have another piece of toast, please?” I froze in the middle of cleaning up my second coffee spill of the day, not quite believing what I had just heard. Surely she didn’t just say the F-word?

Me: Rory, where did you hear that word?

Me: The one you said after you hit your head.

Rory: But I didn’t hit my head. I hit my forehead.

Me: Okay, but where did you hear that word?

Rory: Forehead? From that body book we read. You know, the one-

Me: No, the word you said after you hit your forehead.

Rory: Oh. F***? From you. You said it this morning after you spilled your coffee the first time. You also said it yesterday in the car.

I did? I don’t even remember saying it. Oh God, I have a problem. Perhaps even more upsetting is the fact that for months now my husband has been warning me that this would happen, which means that he was right. I hate when that happens. It throws off our whole family dynamic. I’m the one who says “I told you so” and he’s the one who says “you were right.”

I’ve been a swearer for as long as I can remember, which always seems to surprise people.

I think mostly because I was raised Catholic (thank goodness for confession) and I was a kindergarten teacher before staying home with my daughters. (Trust me, if teaching 25 five-year-olds how to use scissors doesn’t make you want to drop the F-bomb, nothing will.) I realize it’s not a very becoming quality, but I can’t seem to stop myself. For a while, after my first daughter was born, I tried really hard not to swear around her, but I quickly discovered, that “WTF” and “Fudge” don’t have the same effect when you’re stuck in traffic or you drop a whole bottle of freshly-pumped breast milk all over the kitchen floor. There’s just something about the F-word that feels so cathartic. It is irreplaceable.

But, even I know it’s unacceptable for a two-year-old to use that kind of language. (Although props to her for using the word correctly.) It seems a bit unfair to get angry with her for simply repeating something I say, and this potty-mouth incident really drove home the fact that my children are watching everything I do and listening to every single thing I say. That’s a lot of pressure to do and say the right things. I mean, do I really want my daughter shouting at other drivers or yelling obscenities every time she bumps her head? Life was so much easier when I only had my own mental health to consider.

So, here I am, at a crossroad… Do I try once again to replace swear words with something more appropriate? (i.e. shoot or phooey) Do I whisper the words under my breath? Should I ask my husband to teach me swear words in Portuguese so that nobody will know when I’m saying a bad word? None of these options are very appealing, especially the one that requires my husband to sit me down and teach me something. (I still have nightmares about the time he tried to give me a tennis lesson. We didn’t speak for a week.) The only real choice seemed to be to do the unthinkable and give up swearing cold turkey, and so I began my road to recovery.

It’s been about three weeks now since I began “Operation No Swearing,” and I’d be lying if I said it’s been smooth sailing.

(Major construction close to our house and a two-and-a-half year-old who is going through a potty-training regression have really tested me.) Except for a few small slip ups (I don’t think anyone should be held accountable for what comes out of their mouth when they burn their finger.) I have prevailed. Even my gloating husband noticed and gave me props for my new found self-restraint.

So you can imagine my surprise when I heard the B-word come out of my daughter’s mouth yesterday while we were having a tea party, especially since this isn’t usually my swear word of choice.

Me: Rory, where did you hear that word?

Me: You just offered to pour me a glass of …. (Obviously her syntax could use some work.)

Rory: Oh, b****? From one of the songs that daddy listens to when we do dance parties downstairs.

Rory: Uh-huh. Mommy, why are you smiling like that?

Me: Oh, no reason. Pour me another, please.

And just like that, our family dynamic is restored, and all is right in the world.