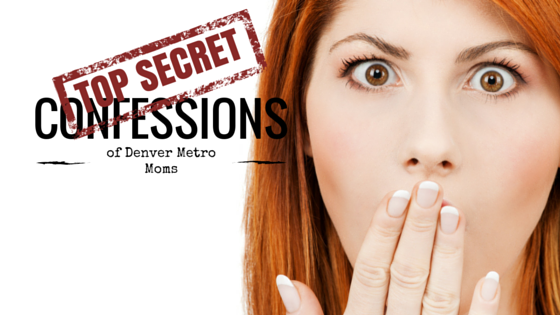 We all have them, those things we’ve done or do that maybe don’t make up our proudest moments. Ice cream as toilet training bribes, reminding the kiddos that Santa sees EVERYTHING, changing the clocks to put the little ones to bed earlier, tricks to get your significant other to take over diaper duty– sound familiar??? Here are a few of our favorite confessions we’ve gathered from our readers and Contributor Team.

ENJOY, and take comfort in knowing that you’re not alone!!! #momlife

I sneak chocolate while hiding during rousing games of hide and seek with my toddler.

When my daughter nurses to sleep, I pretend she’s still eating (she’s really just sleeping) and let my husband have toddler duty so I can finish my book.

If there’s something my child wants to do, but I really, really, REALLY, don’t want to do it, I sometimes pull out the ultimate secret weapon and say, “I don’t know… that seems like a little kid thing to do.”

I have been known to fall asleep on the couch with PBS on, while the baby plays on the floor.

In the summer I rarely know how long it’s been since my kids have bathed.

Our daughter has been pooping on the potty since she was almost two. For a solid (ha!) year and a half, she has been getting some form of ice cream for doing her duty. Thank you, Trader Joe’s “Hold the Cone” and Bonnie Brae Ice Cream for eliminating those dirty diapers from our household. It wasn’t until she turned three that we really started working on peeing in the potty, because let’s be honest, changing wet diapers is a breeze compared to changing rank dirty diapers . . . I do have a lingering fear that when she’s in her 20’s she’s going to wonder why she wants ice cream every time she poops… #pottytraining

I fully plan to be “too nauseous” to get up with our toddler in the middle of the night during my second pregnancy.

Our “precious baby” dog was demoted to the role of just “dog” when my child was born. I regularly apologize to her for not taking her on enough walks, but rarely have the energy to do anything about it.

When people at work or friends ask me, “You look great, is something different about your hair? Is that a new shirt?” it’s usually just that I’ve showered.

I change the words to my son’s Thomas the Tank Engine books . . . because the darn train annoys me.

While visiting my parents in NJ, we did a lot of driving around to visit family. I shamelessly handed my daughter my iPhone and let her go to town with the PBS kids app for about an hour at a time. Screen time was a rare treat since she usually only gets to look at my phone with me, and even then, we just look at my camera roll together. When we got back to Denver, she asked for PBS kids on my phone, and I told her, without hesitating, ‘PBS kids only works in Grandma’s car. Sorry honey.”

I have told my husband, (who can’t wake up for ANYTHING) that I was up in the middle of the night with the baby…even if she never woke up. Just so he’d do the 6 AM shift.

I dropped my son on his head on the kitchen floor!! I was trying to make myself lunch and he was soo squirmy… another example of trying to do to many things at the same time. I snagged him about three times before he finally hit and I was devastated. Him? He acted like nothing even happened! Not a bump or a scratch on him. I’m emotionally scarred for life though.

I sometimes forget how many days it’s been since the last time I washed my hair.

When I have to change a dirty diaper I let the wet wipes pull out in a continuous stream and by the time I’m finished, I’ve practically used 10 wipes. My husband never uses more than 2 wipes at a time even on a bad day!

My son got an Easter basket (actually, it was in a hard hat since he loves construction trucks) from the neighbor. We haven’t fed him much chocolate at all, so I hid it away in the pantry. When he sees it and asks for it (calling it the “thing that the neighbors gave me”), I just pretend I don’t know what he’s talking about since I don’t want him to eat the chocolate in it. Oh, and I took a few pieces for myself. 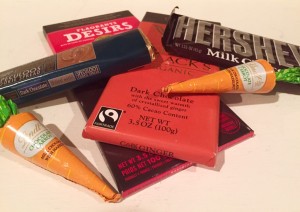 If I don’t get to hide my chocolate bar before it’s discovered, I may, on occasion, say it has nuts or fruit in it to ensure my son hands it back in disgust.

My kids think that when the ice cream man is playing his song that means he’s all out of ice cream.

I still have decorations up from my son’s first birthday… 9 months ago.

I use the TV as a babysitter when I just can’t do it anymore.

Sometimes, if I anticipate a fight over running errands, I say we’re going for ice cream and then divulge the rest of the trip once we’re on the road. “Oh, and we need to stop by the grocery store. Did I forget to mention that?”

My kids eat mac and cheese like 4 times a week. It’s fine.

I’ve mocked my child’s temper tantrum in traffic on I-25, hoping they’d be annoyed enough to stop screaming . . . it did not work.

Since I have a new baby, I have few clothes that actually fit since I’m in that weird state where maternity clothes are too big and pre-baby clothes too small. My baby is spitting up on almost everything I own. I can’t wash it fast enough. So, my threshold for not wearing it in public has become “if the stains on my stuff aren’t too noticeable, then we’re good!”… Ah, how my standards have lowered since baby 1!

When my son was an infant, I sometimes used “I’m really bad at swaddling” as an excuse to get my husband to put him back to sleep in the middle of the night after I finished nursing.

I slept with earplugs when I was sleep training my baby. Momma needs her sleep!!

I do about 80% of the things I swore I’d never do as a parent on a weekly basis.

Some days, I breathe a sigh of relief when I kiss my kiddo goodbye and head to work. Not only is it a break but I finally have time to catch up on personal things! {Like finishing a cup of coffee and peeing alone!}

Alright now, spill! What are your #confessions from #momlife — we want to know! (and we most definitely promise not to judge! #DMMBconfessions