Recently, I did something that many of us would find unimaginable . . . I decided to disconnect and take a break from Facebook. Gasp! For over a month. Gasp! And it was everything. 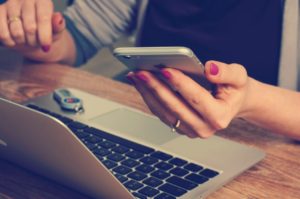 In the summer of 2005, I was getting ready to begin my freshman year of college, and if you can remember correctly, that’s exactly when this new platform called “Facebook” began popping up. Long story short, I have been an active member of the Facebook community for over 10 years. Every day. For 10 years. Sure, there has been a vacation here or there with no updating, or a time or two where I didn’t have wifi service, but it’s safe to say most of the 10+ years I have been checking my Facebook account daily… Aimlessly scrolling, liking here and there, and posting a witty status when I feel the need.

Even just now, as I was typing, my iPad automatically capitalized the word Facebook for me.. Oy.

I’ve tried to disconnect before… I know this sounds silly, but even last month, when I finally got the nerve to do it, my finger hovered over the “deactivate” button a couple of different times before I finally got brave enough to do it. What if I missed out on something? What if I became out of the loop? Would my life be different without over sharing on Facebook?

My son is 17-months-old and to say time is flying would be an understatement. I’m lucky that I work from home, so I get to spend my days with him, witnessing first steps, belly laughs, newfound toddler tantrums, and all of the incredible moments in between that are motherhood. It seems like I blink and the day is over, and then the week and then another month and as time continues to accelerate, I realized how often I found myself on the floor of our playroom, aimlessly scrolling my news feed for no reason. Sometimes it would be for 10 seconds, or sometimes it would be for 5 minutes, but I started to realize how pointless it was compared to the real life happening in front of me.

How much do I care that so and so from high school got a new car? Or that my old neighbor from college voted for so and so?

You see, there is going to come a time when he doesn’t want to play with me, or run across the room into a bear hug, or won’t think it’s cool to have his mom anywhere around, but right now he still thinks I’m the bees knees.. So why would I waste minutes that I will never get back with him?

Couple this with the fact that social media puts an unreal pressure on us to over share the “picture perfect” only moments. No one wants to see a toddler throwing a tantrum, because I gave him the wrong sippy cup, but that, my friends, is real life.

There were also a couple of times last fall that I realized I was taking photos of my husband and family, not because we were having an exceptionally great day, but because I needed something to post. What the what?! Once I realized this was happening, I pumped the breaks immediately.

I’m part of an organization that does the majority of their communication through Facebook, so I would re-connect every few days (AFTER my son’s bedtime) to check the group and make sure I was up to speed… a couple of times I’d also scroll through my newsfeed, then disconnect again.  Each time, I realized I was in a bad mood from being on Facebook – there was too much negativity out there. Toxicity, if you will.

So yes, I decided to disconnect. And I loved every minute of it. It made me realize that I wasn’t missing anything – I was connecting with real life more. The people I talk to on a daily basis didn’t change, and I didn’t have one person reach out to me via text or heaven forbid a phone call and say “hey, I noticed you aren’t on Facebook anymore…” It doesn’t matter if you get 100 “likes” on a photo that you posed, edited, and chose the perfect filter for, because that’s not real life. And if not one of those 100 people notices you are no longer on Facebook, that, in itself, should tell you something about our generation as a whole.

My entire college and adult life I have had this tool that I’ve been wasting time on and I know I’m not alone, so what else have we missed? Bottom line here is this: put down your phone or your tablet and go love on your adorable, amazing family, while they are in front of you!

Have you ever decided to disconnect from social media to reconnect with your family? Tell us about it!