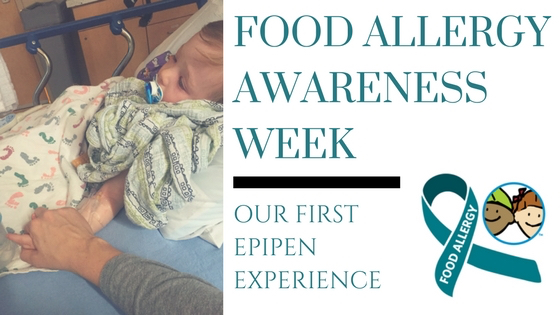 In December of 2015, my son was diagnosed with several severe food allergies (milk, egg, peanut, some tree nuts, sesame, and avocado). You can read more about his diagnosis and how I am coping with it here.

Until March of this year, my son had never experienced a true anaphylactic reaction. We have had experiences with reactions to milk and eggs – hives, mild swelling, and vomiting on one occasion. But those reactions were never severe enough to the point where I pondered the EpiPen (although I probably should have with the vomiting). That was until the day I accidentally packed peanut butter in his lunch box…

I was at a meeting with a colleague at Panera, enjoying my latte and not paying attention to my phone. Luckily, her phone rang and she had to answer it, which prompted me to look at mine. I had 6 missed calls from Josh’s daycare (heart sink). I knew right then it wasn’t good. When I called them back, all I heard on the other end of the phone were the words EpiPen and 911. My eyes welled with tears and my heart began to race. I quickly gathered my belongings from the table and RAN to my car. By the time I was on the road and calmed down enough to call them back, Josh was stable. During the 6 missed calls, I had missed the majority of the commotion. The paramedics were there, he was stable and getting ready to be transported to Children’s Hospital. This is standard protocol for any EpiPen use. So when people say ‘well you have an EpiPen, right’, as my fellow contributor points out in this post, it doesn’t mean that’s all you need. It means an ambulance ride, a day spent in the ER, lots of money, and a nervous wreck of a parent. 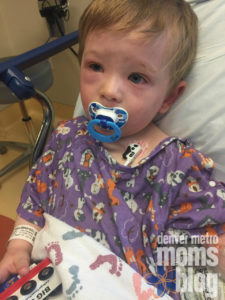 I beat the ambulance to the hospital where my baby was rolled off on a stretcher, in the loving and calming arms of my daycare’s director. I couldn’t believe how he looked! His poor face was so swollen and his entire body was splotchy. He had an IV in his arm and cords all over his chest.

Here was my tough little boy, acting so stoic. Not one tear, not one whine, just wanting some cuddles from mom and his beloved binky.

At this point, we still didn’t know what caused the reaction. The only thing the director could think of is that he touched some cream cheese that was on someone else’s bagel during snack time. But we both had a hard time believing that a little cream cheese could do THIS to Josh. Fast forward an hour, and the owner of Josh’s daycare came to the hospital. She is rarely on-site, so what a thankful coincidence that she was there that day. She is the one that administered the EpiPen, and she is the one that took the time to dig into the timeline of that morning so we could have an answer. She asked me what I packed Josh for snack time that day. I told her that I packed vegan butter as a substitute for the cream cheese for his bagel. She then reached into his bag and pulled out a red container.

I knew at that second what I had done. That red container had the peanut butter in it. The peanut butter that I had packed myself for a snack the day before – and never taken it to work like I had planned.

Josh’s teacher assumed it was soy butter (which has the same consistency, color, and similar smell), so she put it on his bagel. He apparently took one bite of it and said ‘yuck’ threw it away and went to wash his hands. The ER doctor told me that people with allergies have ‘this thing’ in them that tells them immediately when something isn’t right for them. I guess Josh realized that.

Luckily, Josh recovered quickly, and they discharged us 7 hours after we arrived. We were sent home with 5 days worth of Ranitidine (reflux medication) and a Prednisolone (oral steroid). Apparently anaphylactic reactions have a way of rearing their ugly heads again, even after the symptoms have subsided. The 5 days of antibiotics were to prevent that.

I still think about that red container, which I promptly threw in the trash at the hospital. Every mom makes mistakes, but to think that I sent my deathly allergic child to school with something that could potentially kill him still baffles me. Now I see why peanut allergy parents don’t keep it in the house AT ALL.

I learned so many lessons on that day. The biggest lesson being that now I truly understand why food allergies are so scary. Any allergy can have the same impact – milk and egg could do this to him too. It’s hard to believe that one bite of a generic, all-American food product can send your body into a deadly panic.

I am lucky to be surrounded by great people that understand and go out of their way to cater to Josh’s food allergies. I got a text that evening from a neighbor who told me how her 3.5 year old son was very worried about Josh. His worry prompted her to have a conversation with her son about how he needs to be a good friend and that good friends keep an eye out for each other. He told his mom that he would never let Josh eat nuts, eggs, or milk. Just re-writing this makes me tear up. This is all that any allergy mom wants – for other parents to understand and educate their own children on the dangers of food allergies. Food Allergy Awareness Week is a great time to do this.

On a final note, Josh’s daycare director told me that the EpiPen worked IMMEDIATELY. He went from uncontrolled coughing, vomiting, and crazy ridiculous swelling, to stable in a matter of seconds. I am indebted to the entire staff for what they did for him. They did everything they should have and reacted faster than I would have. In my opinion, they saved him.

Epi-First, Epi-Fast! Don’t be afraid to use it. They save lives.