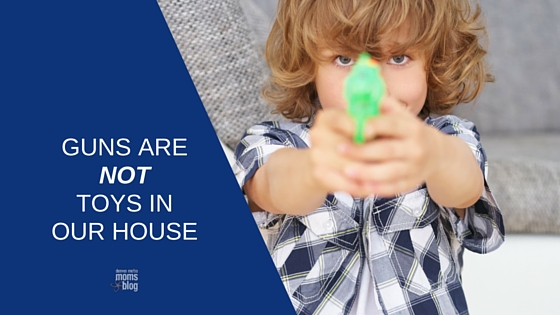 My 3-year-old son had never even heard about guns when he was in a daycare class with other toddlers. In spite of lock down drills, which I hated that he had to do, he still didn’t know what they were. He had only been in his new class with older kids for about a week when he came home talking about guns, good guys, and bad guys. My husband and I were completely unprepared for this. How could our little sweet kid, who loved hugs be talking about guns so early? How should we even talk to him about guns in a way that was age-appropriate?

Kids at this age don’t yet understand fantasy vs. reality, so we couldn’t think of any way to say it other than “we don’t play with guns.”

We tried telling him that guns were dangerous, and that if the other kids talked to him about them that he should talk to a teacher. Unfortunately, as time went on, the talk of guns continued and got more and more frequent. We knew he had no idea what he was talking about, but it didn’t make us feel any better. He wanted to tell us about every kid (and, let’s be honest, it was only the boys) who told him about guns. He seemed completely infatuated with the topic. We felt more and more overwhelmed.

We tried explaining that guns were not toys and that they could really hurt or kill people. But nothing seemed to get through to him.

Then, we had a teacher conference with his preschool teacher. The conference went great overall and we were super proud of our son. Then she told us that two days prior, our son told a little girl “put a gun in your mouth.” We were stunned. We had no idea where he even would have heard of such a thing (he doesn’t watch TV and we don’t talk about guns). It was possible he learned this on the playground at school, but even that was a stretch for what kids 5 and under would be talking about. After our conference, my husband suggested that maybe our son had learned this from the neighbor kid (who is 8), who my son had been talking with earlier in the week when they were both playing in the backyard.

The following week, our son was waiting outside for the neighbor kid again. As I was watching from inside the house, I noticed the neighbor’s kid was playing with a water gun. Our son thought this was so funny. The following day, when I picked our son up from preschool, I noticed he had made something out of blocks. As soon as I saw it, I knew it was a gun, but I decided to ask him what he was making anyway. “A gun!” he happily told me. I repeated that guns weren’t toys and he clarified “it’s a water gun, Mommy!” My heart just sank. What must his teachers think? How are we going to get through to him? And that was when I called my Mom. My mom didn’t raise boys, but as a former therapist, she’s always had helpful advice. Her suggestion was to let him know that every house has different rules. Our house’s rule is that guns are not toys. In addition, though we couldn’t tell the neighbor kid what to do, we could set the rule that in our house, we don’t talk to the neighbor kid about guns, because they are not toys. This seemed to help a little, but certainly brought on a lot more questions. He asked about police officers and whether they hurt people with guns, and why it was OK for the neighbor kid to have them.

We still don’t feel like we understand it all and know what to say all the time, but we know that this is one of many conversations we’ll be having both about guns, as well as about how different houses have difference rules. I’m sure he’ll continue to feel that it isn’t fair, but it’s best to learn that now! But I won’t lie, it’s been tough and involves a lot more watching while he’s in the backyard to ensure that we can intervene when necessary to reiterate our house rules. But, since then, no more building of guns at school or any reports of him talking about them. Just plenty of conversations about them at home, though at least now it includes him saying that they aren’t safe. Whew!

Have you had conversations with your kids about guns? How did you handle it?