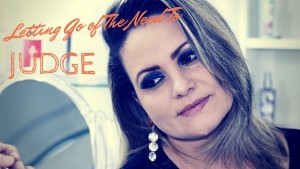 Before I became a mom I had a lot of opinions about parenting. I thought about the type of parent I wanted to be and I made a mental list of things I would and wouldn’t do when I had my own child. I was very quick to analyze and judge behaviors I saw in children and the corresponding parenting technique that went along with it in my mind.

As soon as my daughter was born I quickly saw that all bets were off. Even things that I had determined in my mind about how her birth would go were quickly adjusted. I was going to have an all natural birth… I got an epidural. I was going to labor at home for as long as possible… I lasted about 8-hours before my husband insisted I get my tush in the car and stop being silly (I was in labor for 23-hours so the majority of it took place in the hospital).

The point here is that even though I had strong beliefs and ideas about how my baby would come in to the world and how I would behave as a parent, at a certain point I had to let those go and accept reality.

Someone who knew my plans to have a natural birth asked if I was disappointed after getting the epidural. I answered honestly and said “no” because there were factors involved in that decision that I had no way of knowing before and I believe I made the best decision at the time, given the information I was working with. Of course there was some disappointment, but part of my parenting journey has required me to let go of the rigid ideas I have held about the world and my place in it and replace them with a more flexible way of moving through the world.

This flexibility has extended to other parents, as well, and where I really want to focus my attention. As easy as it is for us to judge ourselves, it’s extremely easy to judge other parents. Because there is no “right” way or even only one way to parent, there are so many conflicting, differing, contradictory ways of parenting in the world. Everyone has an idea of what parenting looks like and everyone wants to believe theirs is the best way.

To admit that your way isn’t the best, acknowledges on some level that not only could you be doing better, but that perhaps you aren’t doing it “right.” This is scary for people. We want the best for our children, so we hope that we are always doing right by them.

For some people this fear and insecurity of not being the best parent causes them to lash out at other parents. They vehemently defend their way of parenting and determine that everyone not doing it like them must be doing it wrong and might even be harming their children. This is what some call a judgmental parent or I guess the new term is “sanctimommy.” Not every judgmental parent is insecure, but I do think that is one reason why some people are quick to judge.

I used to be really judgmental of parents…before I became a parent. As soon as I was in the thick of it with the rest of the parents out there I saw how hard it can be to make a decision from moment to moment and how fluid the role of a parent needs to be. Some days I nail it and I’m the best parent I can be: I don’t raise my voice, I shower my daughter with hugs and kisses, and I am fully present for most of the day. Other days, I’m not the best parent and I lose patience with my daughter when she is throwing a temper tantrum in the parking lot.

If someone were to look at just one tiny snapshot of my life with my daughter and jump to judge me, they might think I’m a bad parent, but they wouldn’t be seeing the full picture. They would miss every morning my daughter wakes up and snuggles with me in bed to help her start her day. They would miss me saying, “I love you,” every chance I get and her telling me she loves me too before giving me a hug.

It’s so easy to judge what we read in one short article about a parent or what we see for a short period of time. I work really hard now not to judge other parents even when I disagree with them. I like to assume that everyone is doing their best and that in any given moment, there might be information that I am not privy to that is affecting an outcome I don’t understand.

Ultimately, not judging other parents helps me be kinder to myself. I still struggle with judging myself as a mom, because I doubt and question myself as a parent on a daily basis. I assume that many other parents do that as well, and I know that is a difficult way to live. I can empathize with other parents who I know are struggling to make the right choices for their children. If I believe that everyone is doing their best and most importantly that I am doing my best, it’s easier for me to not take someone’s different way of parenting as an insult or threat to my way of parenting. We can all be the best parents while simultaneously going about it in completely different ways.

We teach our children to accept other people’s differences, not judge others, and that work ultimately begins at home. Let’s show them how it’s done.

What are some things you used to judge parents for and swore you’d never do but now find yourself doing? Share with us in the comments below!