Disclosure :: Denver Metro Moms Blog seeks to honor the voices of all moms living in Colorado. We understand and respect that this may be a controversial topic, but we ask that you read the author’s feelings and – should you desire to weigh in – that you engage respectfully. Neither DMMB nor the author believe retaliation in the form of violence is ever an acceptable response or form of justice. We grieve with the families of all lives lost in the tragedies this week. 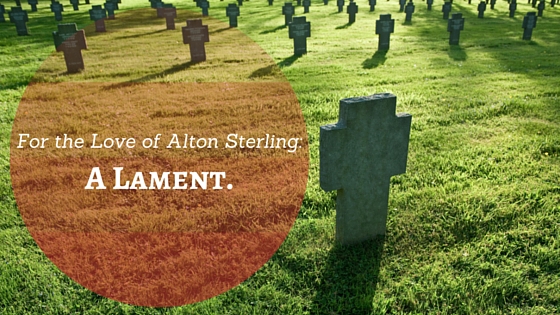 I am broken hearted this week, reading headline after headline about the murder of Alton Sterling of Louisiana and now Philando Castile of Minnesota. My heart is breaking for a group of people, for my brothers and sisters, who feel devalued, dispensable, and discarded. A group of people who wake up each day to the reality that in our country it’s not safe to be black. And it’s not safe to raise black children. If you’re black in America wearing a hoodie in the wrong neighborhood might get you killed.

Or for Alton Sterling and Philando Castile, being black at the right time and place is a death sentence, without trial or jury.

On Independence Day, a well known Christian rap artist, Lecrae, tweeted a picture of several slaves in a field with the caption, “My family on July 4th, 1776.” Many fans were outraged, for example one tweeted,

“Done supporting you bro. You make everything a race issues lately instead of a gospel issue. You promote guilt instead of love.”

I’m genuinely confused and saddened that this wasn’t striking to this individual. It had never occurred to me that slavery, an American institution, was not abolished until 1865. Nearly 100 years after our nation’s Independence Day! Isn’t this notable? Doesn’t it make you feel sad? Not guilty that you didn’t know, but now you do. And there’s something not quite right about that, right? Our nation was free from England, but African men, women and children were still property to be owned, for another 89 years. I can’t even imagine would it would feel like to see the rest of your country celebrating a victory for freedom that your ancestors weren’t privy to. It was unthinkable for a black man to vote or work for pay because they were basically less than human. And with everything going on in the world today, the same basic message still seems to be trending.

This lack of compassion is startling– THIS is the world we live in.

I’m so very sad. I want something so different for the black men and women in my life, for the black children whom I love and cherish. And I want something really different for the white men and women who I love, and who feel so averse to this conversation. I want to live in a community willing to listen to the cries of our fellows in humanity, not devalue them by explaining them away or making excuses.

I want to live in a world driven by compassion, by empathy. Not shut down and closed off because it might hurt or offend. I want my son to continue with the same lack of awareness, not to culture and beauty, but to skin color as a defense of bigotry, brutality, and hate. He plays just as freely with white, black, and brown children. I want him to live in a world where that’s not the exception, it’s the rule.

My mama heart aches for Alton Sterling and Philando Castile–the beloved family members– who have died as victims of injustice. If that was your mother, brother, son, cousin, spouse– would you not seek justice? Would you not feel rage? What if it felt like your entire community was being targeted? Today it’s your brother, tomorrow it’s your son, and next week it’s your neighbor. Would you sit around and do nothing? Would you tell your family to be rational– that anger doesn’t help, that nothing can bring him back? Or would you do something about it? Would you do something so that no one would ever have to feel like you do and to protect others from dying way too soon, for all the wrong reasons? I hope I would.

My mama heart says I have to do something. For my kids. For my friends’ kids. For my neighbors’ kids. And I’m scared too. As I write this there are tears streaming down my face because I’m scared of saying the wrong thing, of being put in my place, or learning more of the harrowing truths about my implicit involvement in a system I abhor. I’m not even sure what this looks like yet. I know it starts with conversations, and invitations to grieve together over the state of our world. I know there’s a black lives matter group nearby that I’d like to know more about. I know I have an open invitation to a roundtable discussion with friends and strangers in the Denver area. And I know it’s MY problem, even if it’s not my skin color. And it’s your problem too, whether you choose to believe that or not. We all have a role in seeing to it that the future for people of color is no longer marked by fear and terror.

Desmond Tutu once said, “If you are neutral in situations of injustice, you have chosen the side of the oppressor.”

There’s no room for neutrality when human life is at stake. Let’s choose to fight for and with the oppressed. Let’s end the silence and speak up. Let’s stop making excuses and start listening. Let’s fight for a world where everyone is free and valued, where all lives matter. But the reality is they don’t. So until then, #Blacklivesmatter