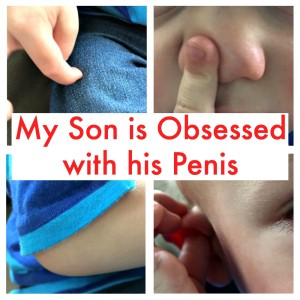 First of all, let me say that my son is only a year and a half. I’m not really that concerned with his behavior, because it’s good (for the most part). He’s still figuring out all the parts of his body and that’s important. Developmentally, it’s great. Right on track. We sing “Head, Shoulders, Knees, and Toes” all the time. He’ll point to other places on his body and I’ll tell him what they are… Thdiss? Cheek. Thdiss? Arm. Thdiss? Elbow. Thdiss? Penis. It’s good, he’s learning! I think what caught me the most off-guard about the situation was just that it happened so soon. I mean, I fully expected that I would have many conversations with both of my sons about proper penis-related etiquette, but just not this soon… Right?

He is all about his penis right now. When it’s bath time or diaper changing time, he pulls it and twists it. He slaps it and smooshes it. It looks terribly painful sometimes, but he looks at me and giggles while he does it and all I can say is, “yeah, bud? Does that feel funny? Okay little man, you do your thing.” Where it gets a little uncomfortable is when he sticks his hand down his pants and totally zones out while in front of company, at the store, at the park… you get the picture…

A friend of mine was over recently, who has a son approximately the same age. My son did the hand-down-pants-zone-out thing and I said, “Oh. Yeah. He’s been doing that a lot lately. Like, a LOT.” “(Haha) really?” she said, “isn’t that called something? When they do that?” “You mean, besides ‘awkward’?” I said and we laughed.

Later, I began thinking, IS that called something and what, if anything, should I be doing about it? Isn’t it a little early for boys to be this curious about their genitals? Should I be worried about it? I did a little internet research and quickly realized that this is very common at this stage. The biggest things to remember are to get and redirect their attention and discuss “private time.”

Now when I see him begin to zone out, I try to quickly get his attention. I tell him, “honey, touching your penis is something that you do in private. If you want to do that in the bathroom or in your bed, that’s fine. Right now we’re playing with blocks though and you need both of your hands to do that. Will you help mommy stack these blocks?” At this age, he has no idea what “private time” means, but there’s no harm in introducing this concept as early as possible.

Luckily it doesn’t happen in public all that often, because he’s so busy and interested in what’s going on around him. Every once in awhile though, I have to correct him. It’s a little bit harder to sit down and have a conversation about private time, so I usually just take his arm, remove it from his pants, pick him up and quietly say, “Exploring our bodies is something that we do at home, during private time. Let’s find something else to do right now, what do you think?”

When trying to correct this type of behavior, I have been careful to remember that this is a natural curiosity and I don’t want to make him feel embarrassed or feel like he’s in trouble because those are moments that he could remember and cause lasting feelings of shame or guilt. I also know that this is one of many phases and even as I write this, the phase seems to be coming to an end. On to a new phase, I guess. I wonder what it will be? Hopefully not a tantrum phase, I’m not sure I’m ready for that yet…

Do you have a tried-and-true method for handling some of these awkward types of behavior? Let us know in the comments!