Almost 2 years have passed since my daughter, Charlotte, broke her leg.

The accident isn’t something I like to talk about, but I’m reminded of it daily. The hot pink cast went all the way up to her thigh and got remarks of sympathy and awe everywhere we went. It’s like the scarlet letter she wore, telling everyone I’m a bad mom. I even still have it on the shelf in her closet. 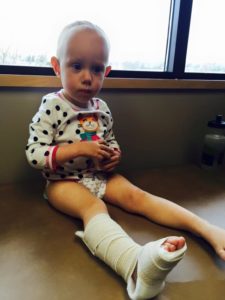 Let me tell you something, there’s not one day that goes by where I feel like I’m “winning” at this mom thing.

As my friend and fellow confidant, Tania, pointed out, “mom guilt is always there, it’s just magnified more in some situations than others.” What I will say is that Charlotte, having had broken her leg, has now opened up a world for me and for others to share their stories of their children breaking their bones. I’ve had more women than I can count come up and know the exact break she had because their child suffered the same accident. Sometimes the child was 6 months old, other times it’s their wrist they broke or their arm. Yet, the end result is always the same. As they look at me with a mix of pity and understanding, from a busted lip to a black eye, I realize that, yes, kids get hurt and there’s hardly a damn thing you can do about it.

As one mom I met put it, “I wish they came with instruction manuals on when to take them in to the doctor.”

I too, spend my days constantly second guessing myself and my decisions. My parents rarely took us to see the doctor (my dad believed ice packs and coca-cola were a cure all), so I spend my time teetering between being the parent who takes their kid in for every bump and bruise, and the one who waits three weeks to get a cough checked out. Am I a horrible mother for taking my daughter to school thinking she’ll “get over” her hurt leg, when it’s actually broken and I subconsciously knew that? Am I wrong for being annoyed I had to sacrifice my day to pick her up when school calls saying she’s not doing well or she shoved a Trix up her nose and it won’t come out? What does it say about me that I freak out (for my car’s sake) when projectile vomit occurs in the car seat while driving? I’m human, I don’t know what I’m doing half the time raising a child and there’s no rule book for how to react to these incidents. I walk the line between being selfish and caring too much or caring not enough. (Of course you can have fruit snacks for dinner just EAT!)

If anyone is winning at this mom gig, please let me know. I can tell you I’m glad I’m flawed. I don’t have to own up to any set of standards and my mistakes give permission for other parents to confide theirs in me. There’s not one day I go to bed thinking, “Damn, I’m an awesome mom.” Most nights I’m rolling my eyes at having to read a story for the 200th time and fighting the “I’m hungry” battle, when I know she’s stalling bedtime. I give in to the Netflix movies she loves because I couldn’t get anything done if I didn’t. Let’s just say, we also had an incident with a part-time daycare, which was easier on the wallet than the eyes. It’s since shut down. I’ve forgotten the sunscreen and the snacks and I’m pretty sure half her cups aren’t BPA free.

Children grow up anyways. They do. Despite all our mess ups and poor decisions. Our lack of hospital visits or too many fruit snacks, they thrive and become adults. Some turn out to be fantastic adults through no credit to the parents, and others turn out to be less than humble human beings through no fault, but bad genetic wiring. Through it all, I’ve learned the only thing Charlotte really needs to survive is the only thing that we all need and seek and desire, which is pure love. I love my daughter and I gather she feels the same about me (at least until she’s a teenager). I don’t have all the answers and I never will and I’m not receiving any Nobel Peace Prizes for mothering, but I’m doing the best I can. 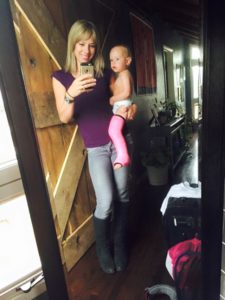 Love, my friends, is enough.

It’s pretty much the only thing we have to give at the end of the day, and as long as we give it freely and without question, it’s what truly matters most.

In the meantime, I’ll try to be more present and hopefully no more hot pink casts. Of course, people frown upon wrapping your kids in bubble wrap, so we’ll see how it goes.