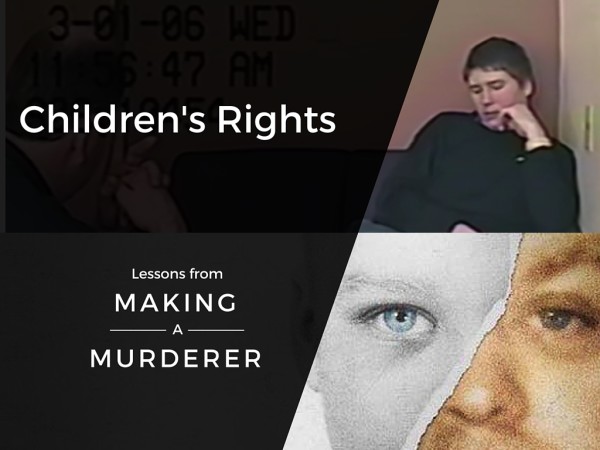 I recently found myself yelling at my TV. I wish that I could say it was over something fun, like watching the Broncos score a touchdown or that my numbers were picked for the 1.5 billion dollar Powerball jackpot (not even close).

Nope. I was yelling at my TV because of a Netflix documentary series called Making a Murder.

Several of you may have watched this, are currently watching, or are interested in watching, so without giving much away, I will tell you why I was yelling. During several long interviews with a 16-year-old child, where no parent/guardian or lawyer is present, I was shocked and appalled as detectives seemingly coerced this kid into telling a story that may or may not have been true, putting him in a very difficult situation and thus, making me yell things like:

“Oh sweetie, ask for your mom or a lawyer or something, just stop talking.”

Now, I’m not here to talk about whether the kid did or did not do any of the things he said. Nor am I here to debate whether the documentary film makers edited the narrative in a biased manner, but in this 24-hour-news-cycle / everyone-has-a-video-camera / social-media-overload climate, it has become abundantly clear (from this story and many of the others that have come out in the past few years) that our law enforcement and judicial systems has some work to do and we need to empower and inform our children how they can and should interact with authority figures in a respectful and self confident manner.

Growing up, I was never taught how to handle a situation like being brought into a police station for questioning. Probably because my parents thought there was no way that would have ever happened, but what if it had? What if I had made some sort of mistake? There had been some sort of accident? What would I have done (besides pee my pants!)?

Would I have known that I had the same rights as an adult to ask for a lawyer or my parents to be present? No.

I don’t know what I would have done, but I’m sure I would have talked their ear off! I would have told them everything, risking that some of my actions or statements may have been taken out of context, sounding more intentional than accidental. Or if they had continuously asked me over and over what had happened and it was clear my answers weren’t sufficient, I might have started guessing the answers they wanted to hear too, just like it appeared the 16-year-old in the documentary was doing…

This series has made me realize that I need to make sure that my kids learn about their rights and liberties in situations like this. Adjusting the misconception that if you don’t talk, volunteer information, let them look in your car or your house, or consent to a body search, you are somehow admitting your guilt. You’re hiding something. No. You’re protecting yourself. You’re invoking the constitutional rights and liberties that many in this country have fought and died to protect. How and when to use these rights are so situational and rules are different from state to state, but when my boys are confronted by an authority figure, be it teachers, principals, police officers, etc., and they feel uncomfortable or are concerned that a situation could escalate in a negative way, I want them to have the confidence to say, in a respectful manner, “I don’t feel comfortable with these questions and I’d like for my parents to be here.” That’s it. That’s all they have say and we’ll be there. We’ll be by their side, helping guide them as best we can.

Do you know your children’s rights? How will you talk to them about what to do if they’re ever being questioned about a crime they may or may not have committed?