I’m not sure why I chose that particular Thursday and not a Saturday, when my husband would have been home with me. I’m not sure I was thinking clearly and I blame that on pregnancy brain. For whatever reason, at 38 weeks pregnant with my second child, I decided to give my 16-month-old son peanut butter for the first time.

From infancy he had exhibited symptoms indicating potential food allergies, including unusual skin reactions, the tell-tale ring around his anus, and frequent vomiting following meals. Of all the foods to introduce, I was most terrified of peanut butter, but I knew I still had to try. I gave him a tiny taste off the tip of my finger… I watched and I waited… A half an hour passed and nothing happened. A slight wave of relief. An hour later and still no sign of a reaction, except that he grew very sleepy. I thought this was strange, as he had already had his nap, but I laid him down in his crib anyway. He fell fast asleep. And he slept. And slept. After two hours had passed, I went in to make sure he was breathing. His breathing seemed fine, so I let him continue to sleep. Finally, after three hours, I decided I should wake him up. When I turned on the light, I was horrified to see a bright, red ring around his neck. His front, back, and face were covered in hives. His armpits and diaper area were also bright red. My stomach dropped. I called the Pediatrician immediately.

You might be thinking, why didn’t you suspect something when he grew so tired? Why didn’t you check on him sooner? Both are legitimate questions, ones that I have asked myself repeatedly {somewhat shamefully, at first}. I can’t really explain it, except to say that hindsight is 20/20 and I was 38 weeks pregnant, exhausted from chasing around a 16-month-old.

As it turns out, anaphylactic shock can manifest in the form of dangerously low blood pressure, decreased respiratory rate, and lethargy, not just the more widely known symptoms of wheezing, itchy throat, hives, and constriction of airways. Sure enough, my son had experienced an anaphylactic reaction. We received our first set of Epinephrine auto-injectors {Epipen Jr} and were instructed to promptly follow up with an allergy doctor. 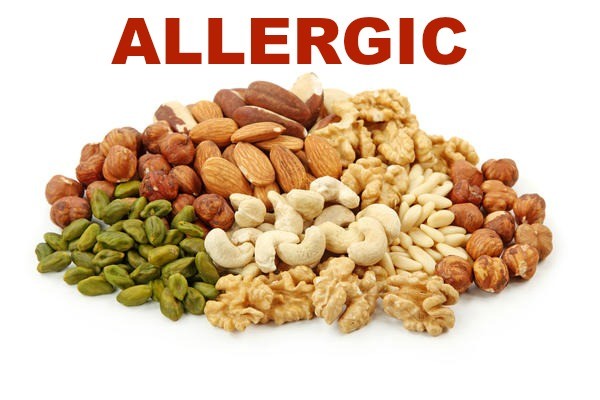 Fast forward one week – I’m sitting in the allergist’s office, restraining my screaming 16-month-old as they prick his back with multiple potential allergens. I watch, horrified, as his back erupts in a wall of massive hives. And then – the moment when my world flipped upside down – the doctor spoke. His words felt like water from a fire hose pointed straight at my face, overwhelming every part of my being, “Your son is severely allergic not only to peanuts, but also to all tree nuts, sesame, lentils, eggs, and stinging insects. This is serious and you need to make sure he does not touch or consume any of these allergens. The first anaphylactic reaction is often not as severe as the second. You need to carry the Epipens with you everywhere. If he shows signs of a reaction, you need to inject him with it immediately. If a reaction goes untreated, it could result in death.”

It was too much to take in, mentally and emotionally. His words kept re-playing in my head, “You need to make sure he doesn’t consume any of these allergens…If a reaction goes untreated, it could result in death.”

I held it together long enough to exit the office and practically run with my son to the car, where I immediately burst into tears. I cried and I cried, the tears flowing from sadness to anger to fear and back to sadness again. My mind flooded with thoughts that probably seem silly to most, how he would never be able to eat sushi or dine at a Chinese restaurant; dump out his Halloween stash and consume way too much of it in one sitting; go to a birthday party and eat a cupcake without reading labels first; casually walk into a restaurant and order whatever sounds good to him, instead having to ask a million questions before ordering. I needed permission to feel sad and to grieve these things. And to anyone who’s ever experienced grief of any kind, you know that it comes in waves. This was but the first wave, surely there would be more to come.

Thankfully, it hadn’t yet occurred to me how I would need to re-arrange cabinets, label food, and decide whether or not to even keep any of the allergens in our home. I surely wasn’t thinking about the sheer terror I would feel when it came time to send him to preschool, when I would have to relinquish control and trust someone else to read labels correctly and recognize the signs of a reaction. Sitting there, crying in my car, I hadn’t yet thought about how I would never again be able to go to a park, a picnic, a Christmas party, a baseball game, or a gathering of any kind, without being in hyper-alert, high anxiety mode. These are all acts I simply took for granted and thinking of them brought on another wave of grief.

What We Know Now

It’s been almost 4 years now since I sat in that allergist’s office and while I’ve certainly had more moments of grief, we, as a family, have managed to navigate my son’s allergies, learning much as we go. Like:

To some, all of this may seem dramatic, and I’ll be the first to admit there are people facing far greater struggles out there. Nonetheless, if you’ve ever carried your barely breathing child into an ER, learned that his airways were almost 100% closed, and sat in a sterile hospital room with the sinking realization that your son was just standing at the precipice of death, you know that navigating food allergies is not an easy journey. I’ve had to get over my fear of people thinking I’m dramatic or high maintenance. And until he can fully advocate for himself, I’ve had to accept that I need to be a little bit helicopter-ish, because my son’s safety is far more important than what other people think. So, here’s the way I go about it:

In what ways has food-allergies impacted your life? What has been most helpful for you in navigating your journey?