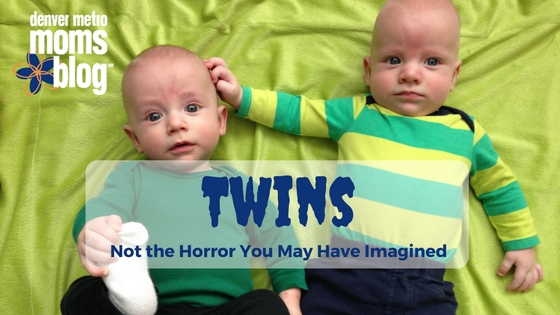 When we found out that we were having twin boys, I was thrilled (insert long infertility story here) and I was terrified!  I wasn’t sure what to expect, but to see the startled looks on people’s faces when we added “and it’s twins” after “we’re pregnant,” was a little disconcerting.  I looked around online for articles and posts about having twins and saw a mixed bag of happiness and struggle, but what do you do when you see a title that includes “the horrors of having twins!?!”

While preparing for the supposed “horror” to come, we took a “multiples” baby class at our hospital and met with some people that were about a year ahead of us in the twin boys journey (plus they had a ton of clothes for us that they wanted out of the house and I was more than happy to take those off her hands!).  While there, we saw some chaos (nothing that seemed unmanageable), as well as lots of smiles and giggles.  That was the moment when I thought “people have been having twins for a long time and if they can figure it out, I can too!”

Now, almost 3 years in, I can firmly say that having twins is awesome!  I get a lot of questions and comments from random people and I’ll share some of my answers to those questions and what our experience is with twins:

Just like with anything new, you can try to prepare by reading or experiencing first hand what is coming your way, but with kids, you can never really know what to expect.  Your kid may be really easy going and relaxed or have crazy acid reflux or colic.  Whether you have one kiddo or more, you figure it out.  Sure, there were moments where I felt like my husband and I were almost literally juggling them to get them fed and sleeping, and I remember very clearly feeling scared and overwhelmed the first day I was home with them by myself, but luckily our boys fall on the “laid back” side of the spectrum and we didn’t feel like we were going to pull our hair out too often.

Q: “Did you have to buy two of everything?”

We’re not big “stuff” people.  We don’t really like having a lot of things cluttering the house, but with kids, that’s just not an option.  You have to have stuff, but you don’t have to have two of “everything” with twins.  They will parallel play for at least the first two years, so they can usually each be entertained by different toys at different times.  As they get older, they do have more moments where they want what their brother has, but we just talk about asking for a turn and being patient.  It usually works pretty well.  Distraction is always a good technique.

Q: “Do they wake up when each other cry.”

They sleep through each other’s crying pretty well.  There were times where they would both wake up and I would have to sit next to both of their cribs, put my hands through the bars, rub their backs and sing, but that happened very rarely.

Even now they don’t really wake each other up when they have growing pains or bad dreams.  We had a vomiting night a little while back (or “bad hiccups” as my son calls them) and had to turn on the light to clean up, so the other woke up and thought it was morning, but we got everyone settled and back in bed again with no problems.  Luckily they’re usually pretty good sleepers.

Q: “Do they love playing or do they fight a lot?”  or “are they good at sharing?”

They’re good at sharing, because they have to be.  They don’t really have a choice.  Sometimes I feel sad and guilty about this.  They have never really been able to be the center of attention or to be selfish, but at the same time, it is nice to know that they’ll be starting their class this fall ahead of the game a bit on sharing, asking for a turn when the other person is done with the toy, and even occasionally using phrases like “I’m mad” or “I’m frustrated” instead of hitting or screaming when something is taken out of their hands.  They love to wrestle and it’s so fun watching them start to pretend play now. 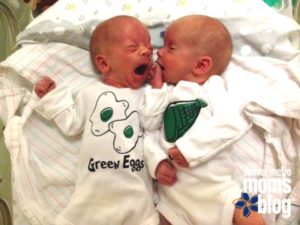 Q:  “Are you starting see differences in their personality?” (when they were more little) or “Are they really different or the same?”

A:  “I could tell how different they were when they were in my belly.”

The baby that sat in the top right side of my belly moved constantly.  The baby toward the bottom left was way more calm.  I could tell from the moment I could feel them kicking that they were different and that’s how they’ve been ever since.  One of my boys is a bit more active and silly – “our ham.”  The other is a little less active and more serious – our “green eggs.”

C:  “Just wait until they start walking.  They’ll be off in two different directions!”

This has not really been my experience.  They like to stay pretty close to one another.  If one is off playing, the other usually joins pretty soon after.  If I can find one at the Children’s Museum or at the splash pad, I can usually find the other right there or a few feet away.  Usually they like to stay close to me, too.  They like to check in with me and get concerned if they can’t find me right away.  They’re good listeners and if I tell them to come back, they’re usually quick to listen.  Don’t get me wrong, they have their sassy moment and have been pushing back a lot more lately, but if I say “you’re about to be here by yourself,” they get moving.

Q: “What do you do when they both need attention?” or “when one of them is driving you nuts, you can’t just hand them off to the other parent, can you?“

There are moments when they both need attention, love, snuggles, etc.  This can be challenging when I’m home with them by myself and don’t have my partner with me to help.  The hardest moments were after they were too big for the double feeding pillow and I had to feed them individually.  One would be happy and feeding while the other would look at me like, “mama, why aren’t you feeding me right now, what are you doing?!?!?”  I would try to pacify the other as best I could (PBS shows helped a bit), but it still really triggered my guilt.  It was also the reason that I chose to do a lot of pumping, so I could bottle feed them during the day at the same time (more on twin breastfeeding here).

There were also moments when my husband was home that we would have two babies that really needed attention and neither of us could have a break.  People with one kiddo probably could take a break and tag team with their partner (also, quick shout out to single moms and dads out there who never get a break – ever!), but with twins, we would just have to swap and hope that would do the trick.

Q: “Do they have their own special language?” or “are they identical?”

There are certainly times when I can’t understand either one of them, but they seem to know what each other are saying, but I don’t think that’s their own special language.  I think that’s just developing vocabulary.  I haven’t noticed any strange connection between them that I can’t explain.  My understanding is that this can be common in identical twins, but they’re not identical.

One of the first questions we asked in our ultrasound was, “and you just see one, right?”  While we absolutely love having twins, a second set of twins would be a lot.  And I’m so thankful that I’ve had twins during this pregnancy, because I really struggled with nausea and it was nice that I could safely leave them in the play room while I went and puked (“mama, you have bad hiccups?”) and they didn’t have to follow me.  I’m also a little relieved to have twins when the new baby comes, because, again, they will have each other to play with while I’m having to feed the baby or pump.  I’m sure it’ll still be a big transition for them, but I’m hoping it will go a little easier, since they have each other.

Everyone has a twin story and they really love to share them with you.  Be prepared for this.  This will usually take up about 3-5 minutes of your grocery store trip.  Usually the comments are directed towards the boys now, so it’s a little more fun to see them interact and speak for themselves.  They’re both very social and outgoing.

Hey twin mamas, what has your experience been?