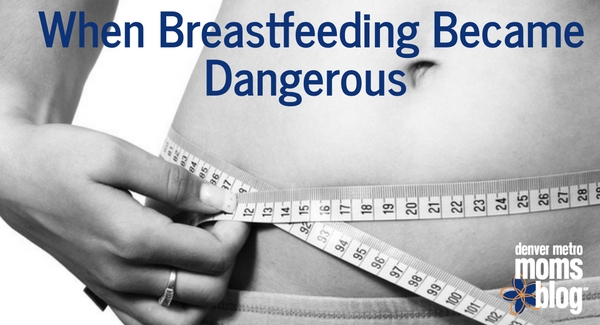 “Oh no,” I thought as I looked down at the scale.

It was 10 months after I had given birth. I hadn’t even been curious to step on a scale since my 6 week postpartum checkup. I didn’t care if I struggled with losing the baby weight or if I ever got back to my pre-pregnancy weight. There was too much else for me to worry about with a baby who was high-needs and giving me a humble reality check.

For some reason, however, on this day I decided to check out my weight, just for kicks. Not only had I lost the baby weight, but I had lost an extra 15 pounds beyond that. I was now at a weight that I hadn’t been since early high school. Then I really looked at myself in the mirror. The dark circles under the eyes, the cheeks that were sunken in further than usual, the jeans that were barely holding onto my hips, and the butt that no longer filled their seat. I knew that my regular clothes weren’t fitting me anymore, but I just figured that I had stretched them out before relenting to maternity clothes or that my body had just shifted where it held the weight.

I was wasting away.

I was still breastfeeding her and, like most recommendations say, I was shooting for making it to her first birthday before ending the breastfeeding journey. I was okay with breastfeeding, because I knew how good it was for her.

But I never stopped to think if breastfeeding was good for me.

Because that would have been so selfish. I was a mom now – everything was supposed to be about her. Right?

My baby was very gassy and sensitive to dairy; therefore, I cut so much out of my diet. If a food was known to make even some people gassy, I didn’t eat it. Other than eggs, I dropped all dairy. It helped, but there was so little that I could eat.

My milk supply was always low, but by malnourishing myself so that I could nourish her, it was making it impossible to get a substantial supply. She was always underweight, so I just fed her as often as possible to try to fill her up; but, that didn’t help much. At 10-months-old, she was still waking every 1-2 hours during the night to eat. I was extremely sleep-deprived. Part of the reason I left my job was because I was physically too weak to function and pumping 3 times during the work day resulted in a measly 3-4 total ounces. To top it all off, I was trying to battle postpartum depression and anxiety with sheer will power…

I found myself in a dangerous state of health and on the brink of breaking.

It was time to make a change. In that moment, I decided to take my life back so that I could better fulfill hers. First, I stopped the night feedings. By taking away the night feedings, I started supplementing with formula to insure she was getting enough. She started sleeping better. Then, suddenly, my daughter weened herself completely off of me, as she preferred the formula. Our breastfeeding journey was over, on her terms, and my underweight daughter finally reached a healthy weight.

Looking back, I don’t know what I would have done differently. Maybe I would have thrown in the towel on breastfeeding sooner or maybe I would have seen lactation consultants and taken fenugreek, eaten more oatmeal and pumped more. I was trying as many solutions as I could handle, but I was just too exhausted to try them all.

It is part of the parenting package to sacrifice so much for your child, but please remember to watch out for yourself, too. I had been told this countless times and had always brushed it aside, feeling like my cup of caring was full to capacity and there was no room for me.

I’m telling you: make the room.