It’s Earth Day! And even though you didn’t recycle that milk jug with the “solidified milk” inside, you can still potentially redeem yourself in the land of eco-karma by being a bee friendly citizen.

I am sure you have heard there is a global crisis about the declining bee population. This issue is important for us as humans, because bees play an essential role in the pollination of many of our foods.

As parents, we cringe at the thought of bees being around our kiddos. Even though, as one beekeeper reported, “honeybees are incredibly docile. If they do sting it’s almost always because you are squashing them, or they feel their hive and the rest of their colony is threatened.” 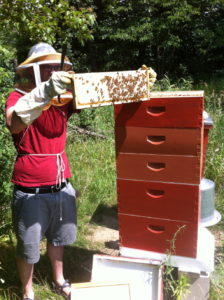 As globally aware parents, we strive to teach our kids to respect and protect nature. “So how do we be both protective parents and good global citizens,” you ask.

1. Plant bee friendly flowers in a part of your yard that the kids don’t spend much time in.

I have a few friends who will not plant flowers in their yard that attract bees for fear of their kids getting stung. While I respect this decision, being strategic about plant placement could help you to be both protective and bee friendly.

2. Teach your kids that when a bee lands on them, act like a statue.

They are much less likely to scare a bee and be stung if they don’t flail around screaming.

When I was in a college theater class, some yahoo in the class with me was swatting at a bee that had made its way into our lecture hall. In my best whipser/yell, I encouraged the young man to leave the “damn bee alone!” He didn’t and the bee stung ME through my yoga pants, resulting in me disrupting the entire class by standing up and screaming in pain. It was quite dramatic, but not the kind of dramatic that one might expect in a theater class.

3. Don’t use sweet smelling lotion before going into the backyard and don’t wear floral print (seriously).

Bees can get confused and scared, so don’t be flower-like and they will probably leave you alone.

Last summer my son and I went on “ant walks” (essentially the laziest get-outside activity I could come up with) where we would go around looking at various ant hills. When the ants would get close to my son, he would get a little nervous, but I explained, “they are black ones and they don’t bite, only the red ones do.” I had no idea that the following week when we went to a resort in Mexico, it would be completely covered in red ants. Picture my 2.5-year-old screaming and crying as though it was his job to save every soul sitting around the pool from the biting red ants. So much for mom’s nature lessons. Help your children be aware of bees, but also WHY a bee might sting. Also, be aware that bees don’t usually sting in the spring and summer seasons anyhow; “they become more protective/aggressive of their hive in the fall, because they are preparing to for the winter and need to protect their honey and pollen stores.”

Commitment to Earth Day can mean doing something major like making your family a one-car household, but it can also mean being more bee friendly.