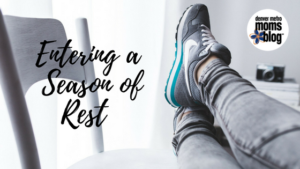 It’s been a tough year…or two or three.

My definition of rest has changed, especially since having a child. I have fond pre-motherhood memories of actually taking a nap on the couch to get some rest. I used to spend my weekends resting after a long week at the office by lounging around in my jammies, watching TV and reading magazines. I sometimes would even go to bed early and sleep late so that I would feel better rested. Life doesn’t really allow for that type of rest these days, and I’ve shifted into realizing that the concept of rest is so much more than a power nap.

I’ve shared on this blog about the loss of my father and the two miscarriages that I’ve experienced in the past two years. Add to the mix the completion of a yearlong intensive leadership training program at work, planning my 20-year high school reunion, a home purchase and its ensuing move… This was all in addition to the constant demands and responsibilities that arise with nurturing a marriage, family, and friendships, while also trying to perform my best at my job.

I’m not complaining! Well, maybe a little. I’m easily irritated when people complain about things that they brought upon themselves. Aside from the losses, I did choose all of these things for my life. So, don’t get me wrong, I am so very grateful for the many blessings in my life, and the last few years have been very full of accomplishments and heart-bursting love. However, feeling grateful doesn’t equal feeling rested.

Thus, the time has come for me to enter into a “season” of rest. I know I’m not the only tired mom out there, so I invite you all to join me in getting some rest if the time feels right for you, too. Here are some steps I plan to take…

I will say no.

I’ve always had a hard time saying no to things, especially when they are things that I enjoy doing; but this year, I will say no even when it hurts to do so. I will no longer be participating in any organized “mom-groups,” and I don’t plan to volunteer on the parent committee at my daughter’s school. I’m not signing up for the extra task force at work, and I’m signing off for now from contributing to this blog. I’m also trying my best to let go of the guilt that inevitably seems to often come along with saying no.

I will say yes.

Although I’ll be saying no to some things, I plan to also say yes to others, such as exercising more often. I will also make it a priority to carve out time to be alone, whether at a coffee shop or while wandering aimlessly around a store. I want to give myself opportunities, even if they are short and scattered, to be quiet and still.

I will actually sleep.

I love to stay up late. Bring on the 10 o’clock news, Jimmy Fallon, some late night snacks and time to surf the web. It’s often the only time of day where I can zone out and do whatever I want, but it’s a vicious cycle. My mornings are rough, and I’m often craving Starbucks around 11am and again at 3pm. I may not be able to take mid-day naps anymore, but my bedtime is something I can control and hope to adjust to an earlier hour.

I will cut back on social media.

We all know it’s a time suck. I justify the time I spend on the web by saying things like, “I wouldn’t have known so-and-so had their baby… so-and-so was in the hospital… so-and-so had died (you get the picture) if I hadn’t been checking Facebook.” That’s a lie! I would eventually get the news – even if it had to be from a carrier pigeon. And remember what I said about aiming for an earlier bedtime? Cutting back on the social media will hopefully help with that.

I will be present.

I know I won’t do everything perfectly, but I do desire to at least be present. My hope is that by being better rested and not as over-extended that I will be able to focus on the things that matter most in my life. Specifically, I want to make sure to create the space for uninterrupted one-on-one time with my husband, daughter, and close friends. They all deserve an undistracted version of me, which is usually hard to come by.

I believe that life seasons arise as a natural response to particular circumstances in our lives. We have the choice to enter into them with open minds and hearts or to stay put and turn down the opportunity for potential growth. These seasons will come and go and hopefully offer important life lessons along the way. I feel confident that one day I will feel up to being involved in and committed to a number of activities again, but hopefully I will be better at finding a healthy balance by integrating some of the restful practices I’m working hard to adopt now.