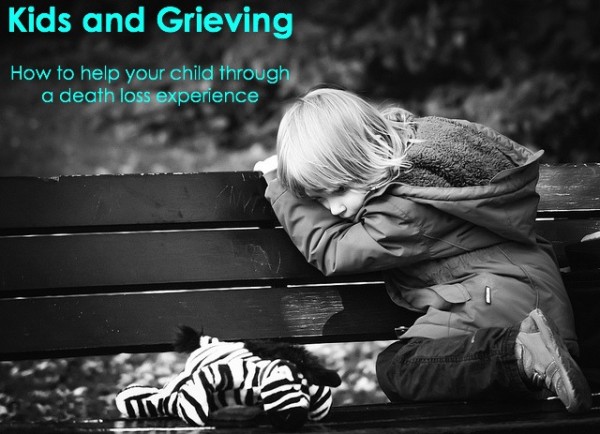 No one wants to tell their kids that a special person in their life has died or is dying. Children live in a world of fantasy and imagination and that’s where we’d love for them to stay. If only it were that easy. If only we weren’t required to pull them back into the realities of life, but sometimes we do and they can be some of the hardest conversations of our parenting “careers.”

When I was 7, my dad died from a motorcycle accident. He wasn’t wearing a helmet and suffered severe brain trauma. He was in the ICU for a few days and one day a doctor came into the waiting area {where I had to stay, because I was “too young to see him” – terrible policy} to explain to me why my dad’s brain wasn’t working anymore, that they were going to take him off the machines that were keeping him alive, and that he would die. I was “hyper mature” about the whole thing. Sure, there were moments where I would cry, but I mostly kept my sadness inside. Outwardly I projected a kid that could handle it and made sure my mom and step-dad understood that I was “fine.” This, of course, all came crashing down around me about a year later when we were learning about the brain during class and it reminded me of the conversation with my dad’s doctor. Suddenly I was not so “fine.” Suddenly, I needed help. I went through therapy and after a while I was better able to express my feelings and emotions.

I took this experience and used it when I began volunteering at a beautiful organization for children, called Judi’s House. Judi’s House is a place where kids who have lost a special person can interact with other kids their own age who have experienced a similar death loss. They work with little kids all the way through teens and young adults, as well as the parents and caregivers that support them. I learned a lot about kids and their grieving stages and reactions from my time at Judi’s House and I felt it was important to share some of the information I learned with you, even though I hope you never have to use it:

Also, it is important to note that there are many forms of grieving, not just death. You may see some of the behaviors below in other types of situations, like divorce, moving, switching schools, other changes/losses, etc.

Many people believe that babies and toddlers don’t have the ability to grieve. That they have not yet formed the connections in their brain to understand when someone is gone and that they’re never coming back, but this isn’t true. They may not rely on visuals as much, but they have formed intense connections with sounds and smells that provide comfort. If these can no longer be found, they may tend to cry for no other discernible reason {e.g., they’re not hungry, wet, teething, etc.}. There may not be anything you can do, either. The only way they can move forward is to form new attachments and this will happen on the child’s own timeline. The best you can do for a grieving infant or toddler is let them grieve and try to provide them with as much comfort and love as you can.

Preschoolers have trouble with understanding the concept of “permanent” {often believing that the special person can somehow magically come back} and therefore rely heavily on repetition, which can be difficult for the caregiver. The best example I can give is a story from my Judi’s House training. A child had lost her mother to cancer and everyday she would ask her dad, “Where’s mommy?” Daddy would say, “Mommy was very sick with cancer and she died.” “Okay,” she would say, “and she’s never coming back?” “No, she’s never coming back.” The little girl and her daddy had some form of this exact conversation everyday for months until one day, she said “Mommy died because she was sick with cancer and she’s never coming back.” “That’s right,” daddy replied. You can imagine how difficult it was for that father, who was trying to grieve himself, to have that conversation with his daughter every day, but that’s what she needed to process her mother’s death. She needed to be reminded and to remember each day why mommy wasn’t there.

With this age group, you may see more nightmares, wetting the bed and other forms of regressive behavior, as well as tantrums or fighting/aggression. Patience is the key with this age group. Even though it may hurt to talk about your grief, make sure that you are allowing your child to be open and communicative with you about their feelings, as often as they need. Reading, drawing, playing, and cuddles will help this little one.

These children have a better understanding of what it means to “never come back,” but they may not completely understand “death.” This age group wants to know how their special person died and what is “happening to them right now.” They want to know where their special person is, who is with them and how they got there. They will often mistakenly believe that they somehow “caused the death” by saying the wrong words or doing the wrong things and will want to know what those words and actions were, so they can make sure this never happens again. These children will ask a lot of questions and, not fully understanding how to react, will try to mimic the emotions of the people around them.

The truth is the most important thing when trying to help this age group, even if you don’t believe they can handle the heaviness of the subject. Listen carefully to the questions they ask and how they ask them. When responding, use simple words and terms and be honest about how the death happened {because if you’re not truthful, trust me, when they find out the truth later – which they will, they always do – they will be very angry that you weren’t honest from the beginning}. Look for ways to encourage conversations with this age group. Go on a walk, draw together, and check-in with them, giving them a lot of opportunities to ask questions and work through their thoughts and feelings.

By this point, they typically understand what death is and that it is permanent. This is where you often see kids displaying “hyper maturity.” They don’t talk about it because they “don’t need to” and act like it doesn’t bother them, like they can handle it, but on the inside they are dealing with a whole plethora of emotions. Don’t let them withdraw! Make sure those lines of communication are open and create opportunities to talk – talk to you, to siblings, to peers.

Adversely, a child may become obsessed with death. A morbid curiosity forms and they will talk about it often and apply it to other people and things. This child is looking for reassurance that this won’t happen to them or to anyone else that they love. While it’s impossible to promise this to the child, honest communication about why this happened to their special person is important to help them understand that the likelihood of it happening again is low.

You may also start seeing a lack of concentration and a decline in their grades. This will be especially hard for those going from a two-caregiver household to one, but structure and schedule are important to help get this kiddo back on track.

At this age, kids can now not only understand the concept of death, but can think about it abstractly. They will ask bigger questions, like what is the meaning of life and why are we on the earth. This age group can often withdraw, feel depression and become angry when talking about the loss. This group will want to think more inwardly about the loss and what it means to them long-term, so encourage them to journal and read, but also engage them. Have them participate in the funeral or memorial service planning. Make them responsible for some aspect of the service or encourage them to speak about their special person. They will likely want to talk more with their peers than with you, but encourage that communication {with the peers that you believe will support them, not help them avoid their feelings through drugs or other dangerous activities}. Talking about it, even if it’s not with you, will help them work through their feelings in a healthy way.

Have you had to help a child through a death loss? What was your experience? What techniques helped your child the most? Please let us know in the comments below.