A friend of mine often jokes that, as moms, we’re invisible.

We’re at the grocery store. We’re at home making dinner. We’re in the office at school turning in forms. We’re at work, toting breast pumps and brushing off an applesauce stain on our dress. We aren’t turning any heads. We’re barely getting noticed.

We might not really be invisible, but we do fade into the background when we have children, don’t we?

We put our kids first, and in the process, we’re rewarded with a world who forgets we exist. You know the standard trope of the disheveled mom in yoga pants who hasn’t washed her hair in three days. It’s become a joke, but it’s funny because it’s true. Personal grooming, old hobbies, things that we love and that kept us feeling ALIVE, those go away a little bit – or a lot –  when you become a mom. Priorities change. Bodies change. And suddenly you start getting emails about how to “get your sparkle back.”

Portrayals of motherhood in our society today never really address just how hard it is to be a mom.

Celebs “get their bodies back” in three weeks. Meredith Grey allegedly has three kids, but you never see them on screen. Am I the only one that wonders who puts them to bed every night? Hop on Pinterest and you’ll see a million activities that some wonderful mother, somewhere, is happily doing with her children. And we think: Why isn’t that me? Why can’t that be me?

But then, last night, Adele got up on stage to accept the Grammy for Album of the Year. Nestled within her beautiful tribute to Beyonce, Adele said something that really resonated with me:

“In my pregnancy and through becoming a mother I lost a lot of myself, and then I’ve struggled and I still do struggle being a mum… It’s really hard.” 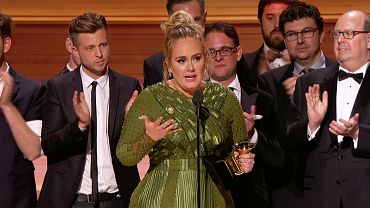 Adele broke the cardinal rule of being a mother in public: you don’t talk about how hard it is to be a mom.

Not in front of other people. You post cute pictures on social media and you bitch in private, with your closest friends. But Adele spoke the truth about motherhood.

The difficulty. The loneliness, the lack of adult conversation, the ache of missing your old life. The fear that you’re doing everything wrong, that your kids will be terrible, or unhappy, or that your relationships are suffering, or that you’ve forgotten who you used to be.

Adele said she lost a lot of herself. And that’s okay. It doesn’t mean she loves her child any less. It doesn’t mean she’s not an incredible mom. It means that motherhood is hard, and it’s okay to say it out loud. Even someone as lovely as Adele, with an amazing talent, gobs of money, and probably loads of help, even someone like that still struggles.

You can even say you hate it and you want to go back. You can cry and scream and kick and act like your snotty two year-old, who is doing the exact same thing. It’s okay to say it. And if you need help, it’s okay to ask for it. Please, please ask for it.

We all struggle sometimes.