I have two sons.

My oldest is three and obsessed with construction trucks and he’s just a hysterical human being. When I got pregnant with him, my husband and I had been married for about six months. I was on the pill, and pregnancy was the very furthest thing from my mind. During the two week wait (which I had no idea was happening), we spent two weeks in Puerto Rico where we drank rum and ate sushi for every meal, and we genuinely didn’t have any indication that I was pregnant until I was 8 weeks along.

I got pregnant again last summer with my second son. My husband travels for work and was seemingly gone for every fertile window I’d had for months, so I was peeing on sticks on the reg just to confirm I wasn’t pregnant and could still have my nightly glass of mom wine. One night I tested just before my son’s bath-time and forgot about it until the next morning. Even though I had blurry vision due to not having my contacts in yet, I saw two lines. I was pregnant. 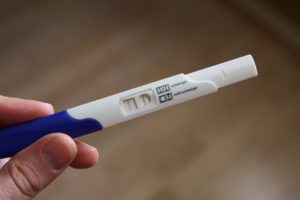 That pregnancy was filled with every medical condition that could go wrong until my water broke at 20 weeks + 3 days, and baby brother was born sleeping just three days later, which is the saddest story for another time.

In both of my pregnancies, one healthy and one not, the two week wait was non existent for me. But now I’m in a very different boat: It’s been a few months since we lost baby brother, I have the clear from my doctor to start trying again, and with his due date approaching, all I can think about is how I should be pregnant.

Now a member of the earth shattering, “Trying to Conceive after Loss” community, I’m learning a lot. I’m trying to get in tune with my body and track my ovulation without becoming a crazy person, which for me as a Type A business owner is HAAAAARD.

When you should currently be 35 weeks pregnant with a baby who your body failed, and you want to be pregnant so badly it hurts…. you feel the widest, most heartbreaking range of emotions.

Sadly, I know I’m not alone. Whether you’ve lost one baby, or are trying to get pregnant for the first time, the two weeks between ovulation and your period  is a weird time. It’s full of hope of what could be, of doubting if you did everything you could, and in my case, the anxiety of wondering if I can have another healthy pregnancy. So if you are sifting through those dreaded two weeks, here are a few ideas from one hopeful mamma to another to help ease the stress:

Go do anything! Go to the supermarket, take a walk, put in overtime at work, go to lunch with your girlfriends…. anything! The two week wait basically crawls at a pace so slowly it feels like time is going backward, so anything you can do to keep your mind off of the wait will help. For me at least, the minute I am alone and not busy, my mind is immediately back to obsessing over the question of if I could be pregnant.

Stay off of Google

Man is this one hard during the never-ending two week wait. Yikes it’s hard. We’re part of a generation where we want all of the answers RIGHT NOW. And my friends, even though I’m as guilty of this as the next person, that’s just not how we’re wired. Because let’s be real.. depending on how/what you “Google,” you could get any result that you were hoping for, especially with the plethora of information on different “trying to conceive” message boards.

So here I am SUPER guilty of this one…… oh my gosh my hair feels greasy today, “Is extra greasy hair a sign of early pregnancy?” My dog is sleeping on my side of the bed…. “Can dogs tell if you’re pregnant before a pregnancy test?” You get the idea. It’s so hard, and I’m currently failing this one big time, but I’m hopeful I can learn to cool it.

Do NOT Test Before the Two Week Wait is Over

This is another one that is unfortunately easier said than done, and ties back into each of the first two points. The minute you take an at-home pregnancy test before you actually should in your cycle, chances are you’re going to get a negative result…. and then you’re going to google it. “Negative at 6DPO can I still be pregnant?” It’s a vicious, vicious cycle, y’all. And the busier you can stay, the less tempted (hopefully) you will be to test.

I’m currently 7 or 8 days post-ovulation which is a time when there is scientifically a very, very, veryyyyy small, if not impossibility, of getting a positive pregnancy test result. But what do you think I’ve been doing every day? If peeing on a stick was your guess, ding ding ding.. .you’re right! And then you know what? The test shows negative, and I am devastated. So in a span of 6 days I’ve gone from thinking I 100000% am pregnant to convincing myself that I’m not because I tested too early. And now I need wine…… which you also are not supposed to drink in the TWW. Send help, y’all.

This should be the easiest one: girl you need to prayyyyy. When you don’t know what to do or don’t think you can wait anymore, just blurt out your feelings to God (Or whoever or whatever you believe in). It doesn’t have to be anything weird and proper, just tell him what’s up. We’re teaching our three-year-old that he can just talk to God about anything, like he’s his buddy, so why shouldn’t we? When you think about the MIRACLE of making a baby, I believe it’s a total God-thing, so what’s it going to hurt if we tell him how much we are hoping that this is our month for a positive test?

So mammas, as cliche as this sounds, if you’ve been trying for 5 years or 5 cycles, my thoughts and prayers are with you so so much. Wanting a baby and getting a negative pregnancy test put you on an emotional level so low that part of your heart breaks off each time you see one line. I never understood the soul-sucking anxiety of trying to conceive until now…. and I’m going to be honest, I liked the naive way better. Sending all of you all of the baby dust, and hoping your two week wait, especially after a loss or stillbirth, flies by for you until you see those incredible two little lines.