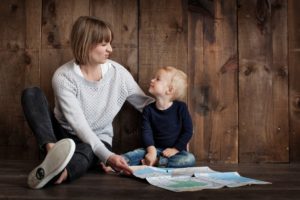 Remember being pregnant and people would say the most outrageous stuff? Complete strangers who felt like they had to comment on the fact that you were pregnant, but didn’t know exactly what to say or how to say it. So they’d just roll with the first thing that came to mind and say something like, “you’re looking big today.” Or “wow, how many babies are in there?” Or, my personal favorite, the conversations when they would bring up things related to labor or birthing. Yeah, no, I have no interest in talking to a perfect stranger about my vagina. Or better yet, hear about theirs.

Now that my son is 2.5, I’m at that next major crossroads where people seem to think it’s appropriate to talk to me about another personal topic…

If I had a dime for every time I’ve been asked “when are you going to have another baby,” just in the last 6 months alone, I’d certainly have enough to buy a bottle of wine (which I would happily drink, by the way, because my uterus is currently unoccupied).

We live in a fairly unfriendly neighborhood, which in my case means that my neighbors don’t know all of my business. So you can imagine my shock when a male neighbor, whom I’ve spoken to five times in the last two years (and only because our dogs like each other) asked me when I was going to have another baby. I’m sure my face was priceless as I uttered something about how “I’m still just having so much fun with my little guy.” For whatever reason, him asking me in that specific moment really rubbed me the wrong way.

Can we please, for the love of God, STOP asking women when they are going to have a baby? It’s just poor manners.

For me personally, there was a long stretch when I knew I wasn’t anywhere near wanting to try to get pregnant again, which I talked about here. And I’m still not super ready, but our society seems to feel so entitled to knowing everything about everyone at all times that somehow we think it’s okay to ask these super invasive questions.

So just in case there’s a mother-in-law, neighbor, co-workers, or anyone else that seems to think they should have some intimate details about private plans, here’s a reminder about what some people have going on and why you should maybe think twice before asking if she’s going to procreate again.

Some of us are dealing with miscarriages or having trouble conceiving again.

I CANNOT reiterate this one enough. Just because someone isn’t yet pregnant again doesn’t mean they aren’t trying. What if that person that you asked just had a miscarriage? Or three? Or what if they’re heartbroken because they’re having a hard time getting pregnant again? People (especially moms) are usually dealing with a lot more than what you see on the surface, so let’s be a little sensitive to that.

Some may not want kids super close in age.

I know that by “society’s standards” I am way behind the curve by having a kid who is closer to 3 and not being pregnant again, but I don’t care. I don’t think kids need to be a certain amount of years apart or else they are going to be “too close” or “too far” apart.

Some may have chosen to just have one child.

Some people just want to be “one and done” and that’s great. That should be respected. Let’s not belittle their decision by constantly asking them when they’re going to have more children.

How about this: Let’s all just do what we think is best for our children and our families and stop worrying about what other people’s plans are for their own. They’ll tell us those plans when they’re ready.