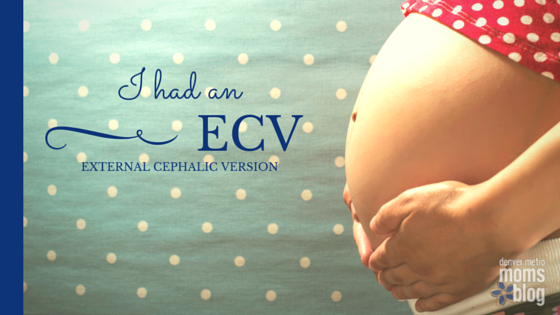 I had a “normal,” “average” pregnancy more or less.

Aside from the unpleasant symptoms, I didn’t really have any problems. All was going according to plan, until my last ultrasound revealed that the baby was breech. That perfect little head-down guy had decided to turn around at some point. Sure, I could try to get him to flip around on my own (and I tried!), but if I didn’t, I would have to have a C-section. So we scheduled an External Cephalic Version (ECV) for when I would be approximately 37 weeks, just in case. What is an ECV, you ask? I had no idea either until I had to have one! An ECV is when a doctor manually turns the baby by pushing and pulling on the outside of your pregnant belly. I asked the doctor how successful these ECVs are, and he said they work less than 50% of the time, but it was worth a shot to try to avoid a C-section.

When I got home from the ultrasound appointment, I was pretty unsettled. None of this was in my plan (haha!)! I YouTube’d some ECVs and freaked. In the mean time, I tried everything to get this baby to flip – no such luck.

If you find yourself in the position of having an ECV, or you’re just curious, here’s a play-by-play of my experience:

When my doctors finished the version and saw that it was a success, they were floored! My two doctors said it was the first time they had a successful version – many times the baby just won’t work with them or their positioning is too complicated.

Three weeks later when I went into labor, I was most anxious to see if my baby stayed head-down after my ECV. He did! I was able to have a vaginal delivery and my little boy (hopefully) has no memory of the mean old doctors that pushed and pulled on him a few weeks before his debut. 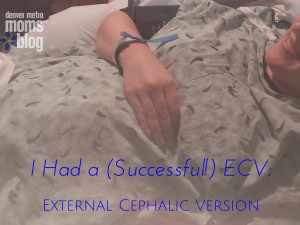 If you find yourself in the position to have an ECV, take a deep breath. I had a successful ECV, and so can you!

Have you had an ECV? Was yours successful? Let us know your story!