Most parents know that the main symptoms of tonsillitis in children are swollen tonsils, sore throat and painful swallowing. But did you know that your child’s tonsils could also affect their sleep patterns? 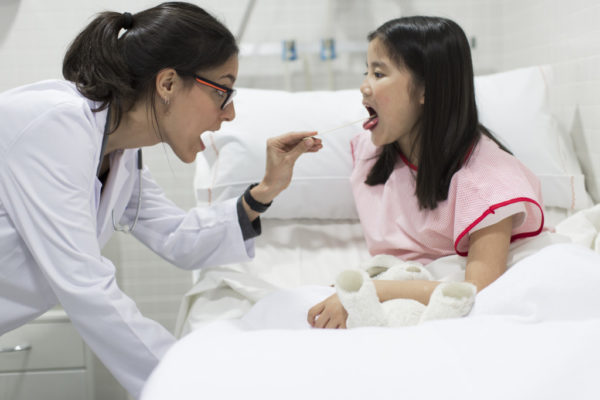 Children who have difficulty sleeping might actually have enlarged tonsils, which causes obstructive sleep apnea (OSA). Sleep apnea refers to a sleep disorder in which a child snores, pauses a long time in between breaths while sleeping, tosses and turns in bed, breathes through the mouth frequently, or has night sweats. According to the American Sleep Apnea Association, an estimated one to four percent of children suffer from sleep apnea. This sleep disorder more commonly affects children between the ages of two and eight years old. Another possible cause of sleep apnea is obesity.

The Connection Between Enlarged Tonsils and Sleep Apnea

If your child snores or has any of the other symptoms of sleep apnea, enlarged tonsils may be the culprit. In children, enlarged tonsils and adenoids can be the result of an infection, or may be completely normal. Tonsillitis (an inflammation of the tonsils) is usually caused by a viral or bacterial infection, such as streptococcus (i.e., strep throat). Tonsillitis typically affects children from their preschool years to middle school or early teens.

Even if your child has tonsillitis, this doesn’t necessarily mean that they need their tonsils out. If a child is showing signs of sleep apnea (whether or not they are also displaying symptoms of tonsillitis), a pediatrician will often recommend a sleep study. A sleep study can help diagnose your child’s sleep problems and determine the appropriate treatments. Also called a polysomnography, a sleep study monitors a child’s brain activity, heart rate, oxygen in the blood, movement of the chest and abdomen, and the air flow from the nose and mouth.

When To See a Pediatrician for Your Child’s Sleep Problems

A child usually doesn’t need to have their tonsils out — unless they have severe or recurring tonsillitis, or have had several instances of tonsillitis or strep throat in the same year. Removing the tonsils (which is called a tonsillectomy) may also help with a child’s breathing problems or sleep apnea. Tonsillitis and obstructive sleep apnea are both reasons to remove a child’s tonsils, but can be separate health issues.

In children, snoring isn’t normal and could be a sign of sleep apnea. If your child snores or is showing signs of tonsillitis, the important thing is to not ignore it. Parents should know the main signs of tonsillitis (and strep throat) and talk to their child’s doctor about treating these symptoms early on.

Want to know more about tonsils, tonsillitis, sleep apnea, and how kiddos health and wellness can be affected? You’re in luck! We recently sat down with Dr. Poznanovic to talk about tonsillitis and sleep apnea — Check out the video!

Sheri Poznanovic, MD, is a pediatric ENT at Rocky Mountain Pediatric ENT Associates. Dr. Poznanovic specializes in ear, nose and throat issues affecting children, including sleep apnea. We are SO thankful that she took the time to give us all this valuable information!