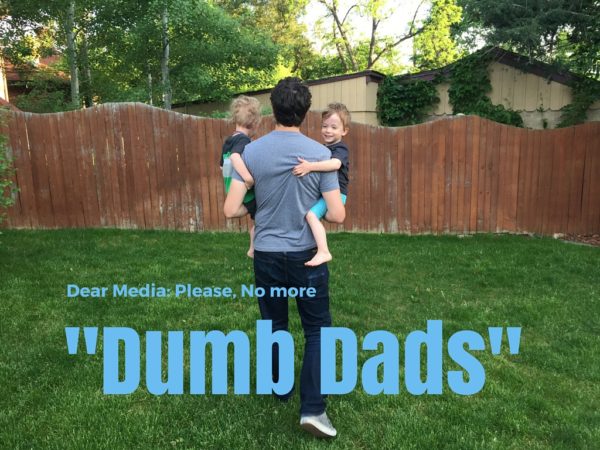 Can you please stop representing fathers as dumb?

It’s really driving me and all of my fellow mom friends crazy. I get that dads can have dumb moments, sure, but don’t we all? (Please tell me that I’m not the only one who has looked all over the house for their sunglasses, only to realize that you’re wearing them.) Why are “dumb dads” still fodder for entertainment? Let me take a moment and talk about the worst offender at this present time:

A man goes to a car dealership. He’s talking to a salesman when he spots a yellow sports car of some kind (sorry, cars aren’t my thing). He test drives and decides to buy it. Next we see the man pull into his driveway, excited about his new purchase, when he suddenly looks up to see his pregnant wife and daughter in the front yard. His face says, “Oh, that’s right, I have a family. I was supposed to be finding a family friendly car. Totally forgot!” He backs out quickly and returns the car to the dealership. It’s a Carmax commercial and apparently they give you time to return the car, if you realize it’s not for you…

Okay, first of all… WHAT? What father sees a yellow sports car and then totally forgets that he has a family?

I’m sorry, but no father I know is that stupid. Not one. I get that you wanted to show your return policy on vehicles, but come on. Really? Did you have to use this ridiculous story to do that?

Perhaps this narrative was successful in the past when fathers were considered the bread-winners and bring-home-the-baconers, while the mothers were the house wives and child-rearers, vacuuming in our high heels and pearls, but the roles of mothers and fathers and husbands and wives have changed drastically. But not for you. You are perpetuating a stereotype that has long since died. This commercial is only one in a sea of other commercials, television shows, movies, etc. that are continuing a stereotype of dumb, out-of-touch, immature, husbands and fathers, who have to be told what to do and mothered, just like children. Men who can’t complete simple tasks. Incompetent fathers who can’t be left alone with their children, because who knows what kind of messy, idiotic, hijinks will ensue that mom has to inevitably clean up when she gets home.

The thing that baffles me the most is that your target audience is women, right? Well, as a women, a wife, and a mother, I don’t want to buy a product from a company that doesn’t understand that my husband and I are both smart, logical, human beings.

I don’t want to buy a product from a company that doesn’t understand that we are a team in all things, including domestic tasks and raising our children. Sure, maybe smaller, day-to-day purchasing decisions are typically in my hands, but when it comes to big decisions (oh, like buying a family-friendly car), we’re a team there, too. 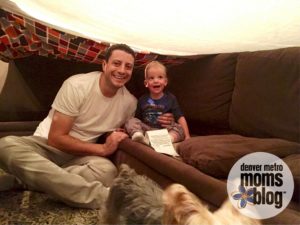 The best commercial I’ve seen and the one that seems to represent fathers like my husband and many others I know, is a Peanut Butter Cherrios commercial from about a year ago, called “How to Dad.” I saw it because it was shared around on Facebook, but I never saw it air on TV (I think it might be a Canadian commercial?). In it, a dad shares his morning with us where he does what fathers do: parents. He helps get his kids up and ready to go, he talks about the awesome stuff dads do for their kids, he reminds them that they have chores, he leads by example. I’d like to see more representations like this for men.

Luckily, it seems that the roles of fathers in media have started improving with shows like Modern Family providing some great dad role models, while still being funny, and, for the most part, I think husbands and dads laugh off these commercials as being stuck in our cultural past, but wouldn’t it be great to see more positive and supportive images of fathers and husbands in the media? Men encouraging other men that being great husbands and dads is all part of the job description.

So, media moguls, I ask that you think about this the next time you have to come up with an ad campaign. Let’s celebrate dads and the roles they play in their children’s lives. Let’s make them equal players in the household. Let’s make sure that they feel supported and encouraged in their roles, because they’re doing a great job and deserve that recognition.

PS: Can I take a quick minute here and also talk to the card companies. Can we stop putting fathers into 4 categories for Father’s Day? Either he’s a “Golf Dad,” a “BBQ/Grilling Dad,” a “Remote Control/Couch Dad” or a “Tools Dad.” I’m sorry, but my Dad and my husband don’t fit into any of those categories. They may do all of those things from time-to-time, but that’s not their whole deal. Most years I give up on trying to find a card that works and just buy a blank card to write my own message, because your pre-written cards are terrible. Ok. Rant over.