Glancing in my rearview mirror, I see my son – He’s singing along to “Down By The Bay” as we drive North on I-25 as part of our weekday morning commute. He’s fed, he’s clean (as clean as a two year old boy could be), and he’s happy. 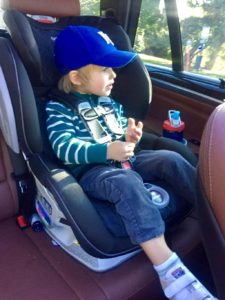 I’m happy too. I breathe a sigh of relief, because I know that his safety (my primary responsibility) isn’t something that I’ve left to chance. He’s not one of the estimated 75% of children not properly restrained in a correctly installed carseat. I’m not one of the parents who mistakenly believe their car seat is installed properly when it isn’t. I’m confident he’s safe, because he’s secured in his new Britax Advocate ClickTight ARB.

Let’s talk about the reality of car seat safety . . .

According to the CDC:

Motor vehicle injuries are a leading cause of death among children in the United States. But many of these deaths can be prevented.

I don’t have to worry about these things, because last week, I got to spend some time with some local moms, the President of Britax, and one of their expert car seat installers. We enjoyed a fabulous lunch provided by Potbelly Sandwich Shop and ad Astra Baking Company while learning all about the newly designed Advocate ClickTight ARB car seat and the amazing Anti-Rebound Bar. If you’re looking for an American-made car seat from a company dedicated to leading technology in the safety of children — Britax is your brand.

I’ll be honest, one of my absolute favorite features of these car seats is the Britax ClickTight Technology.

This revolutionary installation system uses the vehicle seat belt that’s safe, secure, and EASY every time — forward- or rear-facing. All it takes is three easy steps to have your car seat fastened in:

Once the seat is fastened in, you simply secure it with the V-shaped tether to minimize seat rotation with it’s staged release stitches, and your car seat is ready for your precious cargo. Seeing the seat installed by a professional, and practicing it myself with the Britax safety expert by my side helped me breathe easy. I’m now confident for the first time EVER, that I can easily manage proper installation of my son’s car seat all by myself! 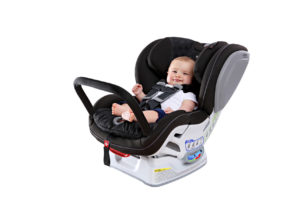 A new feature on the Britax car seats – which can be incorporated as an accessory on any of the ClickTight seats – is the Anti-Rebound Bar.

The Anti Rebound Bar (ARB) is for our littlest passengers who ride rear-facing. Since the American Academy of Pediatrics recommends that children rear face up to two years of age, I’ll be using the ARB for our future kiddos as an added safety measure. The bar attaches to the foot-end of the ClickTight convertible car seats (Advocate, Boulevard, and Marathon) and manages rebound motion in the opposite direction of impact during a collision.

Knowing that I have my son in the Britax Advocate ClickTight carseat with a stabilizing steel frame, energy absorbing base, V-shaped tether to minimize seat rotation with staged-release stitches and 3 layers of Safe Cell Impact Protection makes me feel like even if his breakfast wasn’t as well balanced as I would like, I’ve made a great parenting decision about my son’s safety.