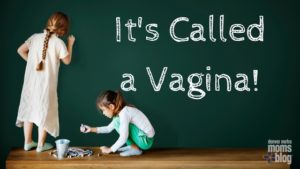 Consider this my PSA to all parents of babies and toddlers who are simultaneously learning about their bodies and how to speak: Girls have vaginas and boys have penises.

There are actual, scientific names for every part of our body, and penises and vaginas are no exception. This may seem like an obvious statement, but here is a list of words I have actually heard parents use to refer to penises and vaginas:  pee pee, tinkle spot, treasure, and the ever-so-vague, “down there.”

In our house, we use the words penis and vagina*. It was never a conscious decision to teach my daughters to call their body parts by their actual names, it just made sense to me. Because that’s what it’s called. (And also because I didn’t want my daughters learning the real name from some poorly made puberty video in the fifth grade.)

Is it sometimes embarrassing when my three-year-old loudly proclaims, “Mom, my vagina itches!” during baby story time at the library? Of course. Would it be easier if we had a cute little code name for that particular body part? Probably. I just don’t see the point.

My unconscious decision to use anatomically correct terms was solidified when I heard a former private detective who specialized in pedophile cases speak at a mom’s group meeting I attended a few months after my first daughter was born. He emphasized the importance of using real names to identify body parts, because if your child ever found themselves in a situation in which they had to testify against someone who molested them in some way, the words “penis, vagina, and breasts” are much more specific and powerful in a court of law than say, “my special place.” Basically, not teaching and using the actual, scientific terms for male and female genitalia could potentially have life-altering consequences.

Vagina was a word that my first born knew very early on. When we were taking a bath, I would often play the “point to the body part” game, and I always made sure to include vagina. Because it’s a part of her body. My younger daughter is only 15 months, but when I hand her a wash cloth and tell her to “wash her vagina” in the bath every night, she knows exactly what I mean and gets right on it.

I have two girls, but they both know the word penis, because they’ve both seen naked boys at one point or another, and inevitably asked, “what is that?” To which I answer, “That’s a penis.” Because that’s what it’s called. For a few months after learning the word, it was not uncommon to hear my oldest daughter randomly tell strangers upon meeting them, “You’re a boy, so you have a penis.” (Most cable repairman, bank tellers, Chick-Fil-A drive through workers, etc. were good sports about it. I mean, you can’t really argue with a statement like that.) Fortunately, that phase didn’t last forever.

I want my daughters growing up knowing the anatomically correct names for all parts of their bodies, and I also want them to know that there is nothing shameful or embarrassing about any body part. Because there isn’t.

So, I say the words matter-of-factly, without giggling or blushing or whispering, because if they notice that I’m uncomfortable just saying the name of a body part, how can I expect them to ever feel comfortable discussing matters such as menstrual cycles, sex, or most importantly, inappropriate touching?

I use the correct names for all body parts because when I tell my daughters that no one besides them should be touching their vaginas or breasts, I want them to understand exactly what area of their bodies that I’m referring to. This is not something I can afford to be vague about.

Even now when I put my oldest on the toilet, I ask her permission to help her wipe her vagina. I want her to know that it’s her body and her vagina, and I feel very strongly that I must set the tone about the importance of someone asking for her permission to touch it. She is in charge of her body. Every single part of it. Not me, or her father, or her future partner. Only her.

I also want her to know exactly what words to use if she ever finds herself in a situation where she has to tell someone to stop touching her.

This is why if you’re ever at our house on a Saturday morning, you may hear something like, “Hey Rory, pass the syrup, and also, what do you say to someone if they’re trying to touch your vagina or your breasts?” To which she will most likely reply, “Stop touching my vagina. I don’t like that.” Very good, now finish your pancakes.

The more we talk about it, the less taboo it becomes, and the more confident she will feel telling someone no, whether it be when she’s three or sixteen. So, at our house, we don’t do cutesy names. We don’t call it a “pee pee” or a “special place” or a “private area.” We say vagina- because that’s what it’s called.

*I understand that there are various parts of the female anatomy including the labia, vulva, and urethra, but to keep it simple we use vagina as a general term.