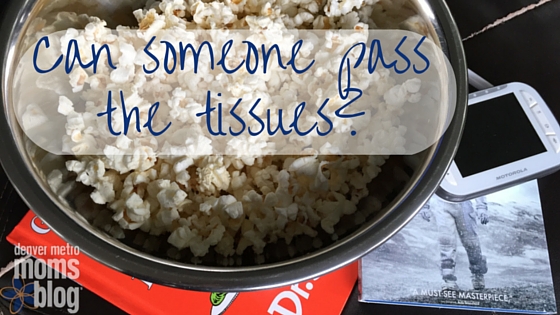 Okay, so I recently wrote about how my body temperature change thing was the most noticeable change that happened to me, post-baby. Well here’s another unexpected change: movie watching.

I remember an article going around on Facebook a while back about how having a baby can change your brain chemistry and I totally believe it! I think it’s changed the way I watch movies. I used to watch movies and be able to lose myself in them. Maybe I would put myself in the shoes of the main character and think about how I would handle a given situation. It was fun to escape from my life a little bit and “be someone else.”

BUT, now that I’m a mom, I can’t watch someone on the big screen die, get abused, use drugs, etc, etc and not get upset. I used to think, “oh, that’s just a story.” Now, I’ll think, “that is someone’s child!” Or, “I can’t imagine if that happened to my babies.” Somewhere along the line, my brain switched from it being all about me to it being all about them. I suppose it happened when I first looked at their brand new, little faces, but I never thought my movie watching experience would change like this. Case in point (also, potential spoilers ahead):

A couple of months ago, my husband and I watched “Interstellar.” A very smart movie about space travel, time, gravity, and relativity. Before I had kiddos, I probably would have had a very interesting conversation with my husband about all of the science, physics, and math that Christopher Nolan used in the movie to make it as accurate (based on our current understanding of our galaxy) as possible.

Instead, I cried through tissues for most of the movie. When Matthew McConaughey had to decide between leaving his family and saving our species, oh man. I cried when he watched videos of his children, who had grown twenty years, while he had only grown 2 hours (it’s the whole relativity/time/gravity thing). Instead of talking about cool science stuff, the hubs and I talked about how hard it would have been for us to leave the boys behind. How awful it would have been to miss out on watching the boys grow up.

And it’s not just movies! TV, viral youtube videos (I’m looking at you adorable child, hearing for the first time after your hearing aid is turned on), commercials, almost everything on Ellen… I might have teared up a little pre-baby, but post-baby, I’m a mess! It totally affects me WAY more now than it used to!

Oh, and I’ve also had legit, serious conversations with my husband after watching post-apocalyptic movies or shows where I’ve explained to him that he has to get the boys to safety and let me go, because there’s no way I’m going to make it. My asthmatic self cannot outrun zombies and he’s going to have to make sure they survive. “Yes, honey,” he tells me, then probably rolls his eyes as soon as he knows I’m not looking…

So, now that I’m adding to my list of things that have changed since having children, what about you? What’s different these days?