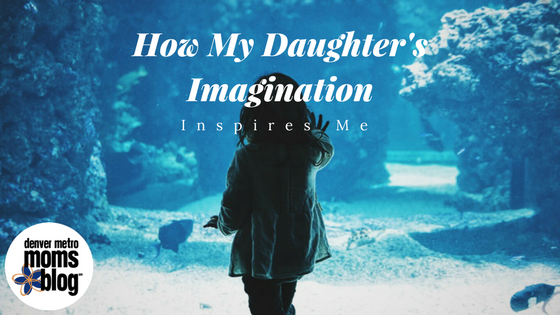 “I’m a mermaid,” my daughter said to the woman at the car dealership. She sat down on the floor and moved her legs around to demonstrate.

“Wow. Look at your mermaid tail,” the woman said to her. I smiled at her, thankful that she chose to play along that day.

My daughter’s obsession with mermaids began innocently enough. After watching The Little Mermaid at a friend’s house, initially she didn’t seem too interested. Then we began checking it out from the library every other week. Slowly, we started hearing her belt out “Part of Your World” every day and my husband’s name turned into Prince Eric or King Triton, depending on my daughter’s mood.

One day we went on a mermaid hunt. It wasn’t enough to pretend like my daughter had a mermaid tail. She wanted the real thing. I entertained this idea hoping that her lively imagination would be willing to work with me if we came up short. Off to Target we went, where miraculously we found the perfect mermaid bathing suit complete with mermaid tail. It was a rousing success.

My daughter’s journey to becoming a mermaid reminds me of how much I love this stage, where she believes she can be anything she wants to be. Happily playing along, I pray she never loses her sense of wonder, even though I know in some ways she most definitely will.

I used to dream the way my daughter dreams. I often found myself so completely lost in the stories I created in my head that they felt more real than fantasy. By the time my life became consumed with adult responsibilities, I strained to remember what it was like to believe the world was mine just waiting for me to claim it.

What happened to the girl who used to sing so loud in public you would think she was performing on a Broadway stage? What about the girl who told her friends she would win the gold medal in the 100 meter dash at the Summer Olympics one day? She puffed her chest out and believed it would be true. No one could stop her or tell her otherwise. I remember her. That girl was me. And even though I miss her every day, I can’t help but feel like her spirit has finally returned to me. I see her in my daughter.

At 4-years-old, my daughter’s dreams are short term at best. Today she dreams of being a mermaid, but maybe tomorrow she will tell me she’s a lion. I plan to go along with her for all of these rides as her trustworthy sidekick. I want her to believe she can be anything she wants for as long as she wants. The world I want to create and nurture for her is one free of limitations. I hope that in addition to enriching her own life, this will in turn encourage her to be a more compassionate citizen of the world.

The ability to imagine ourselves as different is one of our greatest strengths and I believe one that ultimately leads to greater kindness. I don’t want my daughter to believe she is only one thing and can only do so many things. I don’t want her to believe that she can’t reach across the table and connect with another soul because of any limitations society or culture places on us.

Her imagination is one of her greatest gifts and I want her to take it for all she can. I want her to use it as a tool to do good in this world, both for herself and others, which is why I am committed to playing along and learning to believe in magic again myself. For now, my daughter is a mermaid until she tells me otherwise. I will stay in this world with her for as long as she needs me. I will pave the way for her to reach her dreams, even if all she ever wants to do is collect “whooz-its and whatz-its galore.”