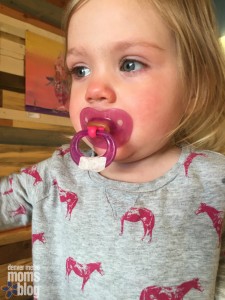 I was such a “know it all parent,” before I was actually a parent. Lots of us are. We’re all, “OMG, I can’t believe she’d bring that kid to Target without shoes on!” and “Why is that three year-old still in a stroller?- Surely she can walk by now!”

But once you become a parent, you start to pick your battles and you realize that the fight over shoes really isn’t worth it, and if you have to choose between dragging your kid down the street or pushing a giant baby in the stroller — you’re going to choose the stroller every time.

And now, here I am, my little one almost two years old, with a pacifier in her mouth pretty much 24-7.

I am one of those moms.

And frankly, I couldn’t give two figs.

Okay that’s a lie, but most of my concern lies in her speech development and whether or not the constant pacifier use is impacting her pallet or her teeth. Alice has always been a kid who watches more than she talks, but as she nears two I worry that she isn’t speaking as much because she has that stupid thing in her mouth all the time.

Right now we are just working on her having it only during nap-time and nighttime. I know, realistically, that I am the parent and it is my choice as to whether she has it or not, but let’s face it, I am selfish and I really don’t want to deal with a cranky kid who can’t sleep for three days because she’s used to always having that paci in her mouth.

We are that family that has pacifiers all over the house. We tell babysitters to make sure she has at least 3-5 in her crib when they put her down for bed, because she needs to be able to easily find one in the dark so we don’t have to go in and get it for her. I have them all over my car, the diaper bag, my purse. I found one on the front porch last week. I’m sure I’ll be finding them for weeks as we wean off of them.

We’re just going to say hey girl, here’s the deal. This pacifier has got to go. We aren’t ready to do that quite yet. I don’t think any of us are. We’ll get there eventually, and I don’t think I’ll have a kindergartner with a pacifier in her mouth. But even if I do, I DARE YOU to say something to me about it. Because like I said, as parents we pick our battles.

What about you – have you found a great method for ditching the pacifier? If so, I’d love to hear it.