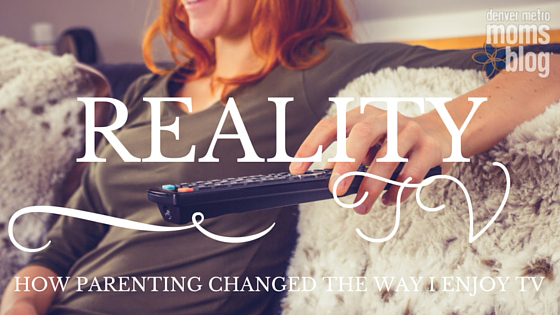 For the past two decades I have been a closeted reality television junkie.

Actually, to my nearest and dearest (and the chagrin of my husband) I am not so closeted. It has been fascinating and frankly addicting to be immersed in other people’s lives.

It all started with MTV’s 90s sensation, “The Real World.” Actually, if I’m being honest, I was a die hard “Road Rules” fan. Combine reality TV, competition, and throw in a cheesy romance for good measure and that’s good TV. Watching 20 somethings live their lives in a hip city, under one roof, naturally led to an obsession with the Real Housewives franchise. Can Andy Cohen do no wrong? I am more overly involved in the Real Housewives drama than I feel comfortable sharing with you here. And yet lately when I watch it, I feel a twinge of ickiness at the fact that these women are parents (most of them) and are doing ridiculous things on TV that will forever be immortalized on the Internet. Drunken shenanigans are all well and good when cameras aren’t rolling and cell phones are safely stowed, but airing your ridiculous behavior worldwide causes me to pause and wonder just how starved for fame you must be to do that to your children.

And why am I watching you do it?

Then there’s The Bachelor franchise. Sigh. The Bachelor is all things guilty pleasure and I think I have seen every season, including Bachelor Pad and Bachelor in Paradise. Stop shaking your head at me. I have watched bachelors and bachelorettes marry on network television and spent the year we lived in Vail stalking Trista and Ryan Sutter. I never saw them, not once, but my husband ran into them at the grocery store. Literally! Trista ran into him with her grocery cart. Some guys have all the luck!

Recently I got in bed after a long day and turned on Ben’s season of the bachelor: home town dates. I normally love this episode because things get real (as real as relationships can get on reality TV). The words, “I love you” usually get tossed around and you start to get a real sense of the “contenders” (after all, it is a show with a winner and many losers). Tonight I watched a mom literally chug from a bottle of champagne with Ben in her kitchen (not to mention a camera crew), which I can only imagine she was doing out of sheer terror that her daughter’s heart was about to be broken. And I don’t blame her. Suddenly I found myself relating more to the parents than to their kids. How did this happen? I’m no longer swept up in the emotions of the 3-week love affair. I am nodding my head in agreement with the dad who thinks her daughter is letting her emotions get the best of her.

I guess I owe The Bachelor franchise and all the reality televisions shows that came before it, a debt of gratitude. It’s been fun guys. Oh sure, I’ll still watch, but it won’t be the same. I can’t undo becoming a parent. (Trust me, I’ve tried). I grew out of the Real World/Road Rules Challenge (what are they, 12 years old? For the love!) and I’ll grow out of the others.

A moment of silence for this depressing revelation. Off to fold 6 loads of laundry, binge watch Downton Abbey and reluctantly read the news.

What are your guilty pleasure TV shows? Has becoming a parent changed the way you enjoy TV?