We are so thankful that our partners at Ford Motor Company let us check out the Empathy Pregnancy Belly Suit and learn more about how they’re making driving safer and more comfortable for moms!

We’ve all seen the scene in the movie when the pregnant women heaves herself out of the chair, belly-first, letting out a little (or a big) groan so she can shuffle across the room, chase after an unruly toddler, or heaven forbid – go to the bathroom. Before I was pregnant, I thought these women were exaggerating. I thought the awkward, pained movements and the large maneuvers were over-dramatized. I thought, “C’mon ladies, it can’t really be THAT bad.”

As it turns out, I was wrong. At some point in my previous (and now my current) pregnancy, I became one of those women – I am currently one of those women. Standing up is more of a giant momentum driven heaving move, and rolling over in bed usually involves some involuntary (and über feminine) groans. As it turns out, before one actually experiences pregnancy, it is nearly impossible to imagine just how cumbersome, heavy, and uncomfortable the belly and everything that comes with it can really be.

The absolute beauty of these graceful pregnant maneuvers hadn’t been lost on my husband . . . he has watched, and assisted, sometimes with a little bit of disbelief in his eye (which is fair, I’ve been known to have a bit of a flair for the dramatic) . . . Until now. Until he got to experience the one of the joys of pregnancy in all their hot, heavy, awkward glory. Until one summer day when he got experience empathy pregnancy and wear the Ford Motor Company Empathy Belly Suit – a weighted garment that enables women AND men to experience the effects of pregnancy

This lovely belly let my husband experience firsthand just a little part of what pregnancy feels like – specifically while trying to load a toddler in the car, get himself into the car, buckle up, turn around to ask toddler to behave, drive a car . . . you get the picture. After about ten minutes in the thing, he summed up his experience like this, “That belly was HOT, it hurt my back, and made me feel really trapped.” I think he counted himself lucky that it didn’t come with kicks to the ribs/bladder, heartburn, and exhaustion. From my perspective, the boobs looked ridiculous on him, but it was really great for him to get to experience part of what pregnant women go through and how uncomfortable it can be to perform everyday tasks.

Ford Motor Company’s Empathy Belly Suit was designed and used by Ford engineers to create vehicles that work in real life, that accommodate and adapt as people move to new stages of life, and that keep us all safe.

In a recent survey, Ford Motor Company found that 88% of women say they drove their entire pregnancy with only 7% stopping at the end of their third trimester. 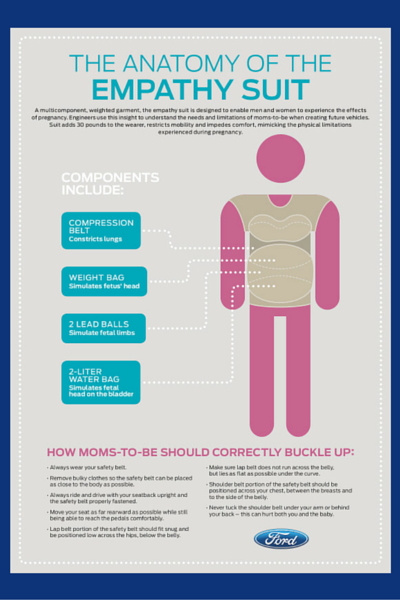 Aside from being designed with pregnant mamas in mind, the newer Ford vehicles are designed and built with safety in mind. Some of the AWESOME safety features available that give us real peace of mind include:

I for one think it’s awesome that my husband got to experience a little bit of an empathy pregnancy . . . and think it’s also awesome that Ford Motor Company is so dedicated to making vehicles that really work for families! I am also thankful for all of these fabulous photos that I have now shared with the world. 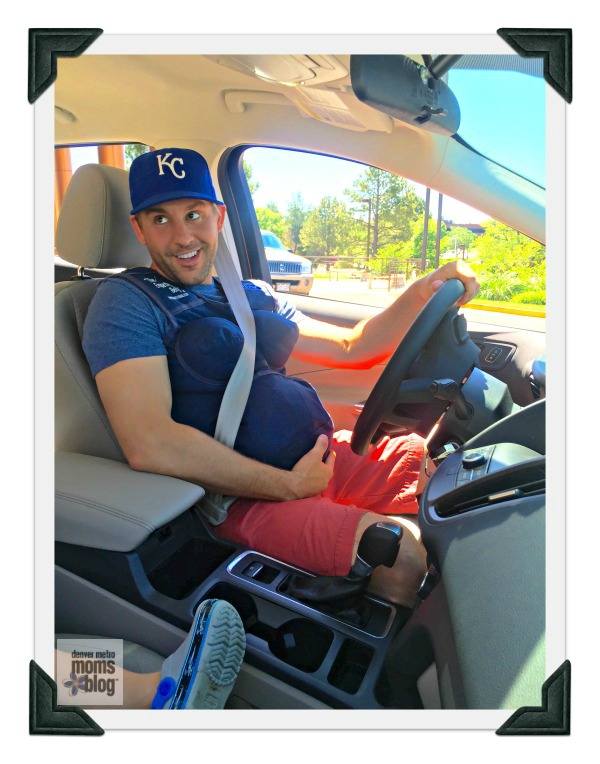 What about you? Think it might be nice to put your spouse through a mini empathy pregnancy to feel what pregnant women go through?