When I found out I was having two girls almost exactly two years apart, I promised myself that I would do my best not to compare them. 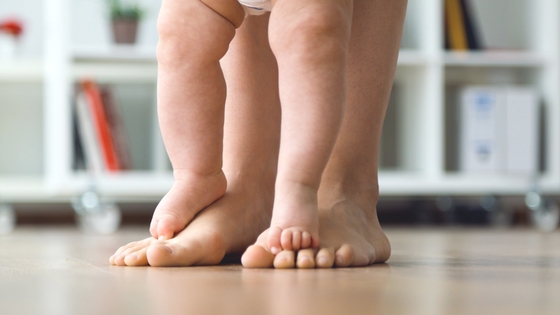 Growing up with a sister only 11-months older than me, I know first-hand the frustration that comes with constant comparison from parents, teachers, and even ex-boyfriends. I never want the girls to feel as though they are inferior to one another or a disappointment to anyone simply because they’re different. One of them is always going to be better at math or reading. One of them will always be more athletic or run faster. They can’t both be the best or the first at everything.

But as their mother, my job is not to point out these differences; my job is to make sure they understand that different is okay.

For most of Scout’s (my second born)first year, I did well on my promise not to compare my girls. Mostly because I didn’t have time to analyze and obsess over every milestone. With my first daughter, I was somewhat obsessed with milestones. I remember checking my baby app every month to make sure that she was meeting each new milestone right on time. I became anxious and worried if I noticed that other babies her age could crawl, walk, or talk before her, but Rory was an early walker (10-months) and an early talker, so I never experienced full on panic when it came to meeting certain developmental milestones. When Scout was born, I still kept milestones in the back of my mind, but I admittedly checked my baby app much less often. She crawled around the same time as her sister and said her first word a few weeks later, so when the 10-month mark came and went and she still wasn’t walking, I convinced myself to give her a year before going into panic mode. After all, plenty of babies learn to walk past a year. Every baby is different. This became my mantra. Even still, I decided to casually bring it up at her one year well check appointment. My doctor, of course, told me what I already knew: She is fine. She will walk when she’s ready. You promised you wouldn’t compare them. (Okay, she didn’t say that last part.)

It wasn’t so much the fact that she wasn’t walking yet that bothered me. It was more that she didn’t seem to even care about walking.

Rory always naturally progressed to the next milestone in a timely fashion. After she learned to crawl, she began pulling up and then cruising around on the furniture, then taking steps, and then full-on walking. Scout had been pulling up and cruising for months, but she seemed perfectly content to stop there.

Of course, it doesn’t help that our friends and family were constantly asking for updates on her walking progress. “Is she walking yet?” No. “But she’s starting to, right?” No, not really. “But has she taken any steps?” Mental eye-roll. Nope… just crawling.

Naturally, I was relieved when Scout decided she was ready to take a few steps about a week after her first birthday. Finally! The wait was over! Or so I thought. She took a few steps and then went right back to crawling. It was as if she wanted to check walking off her list and then be done with it. To this day, every night her dad and I stand at opposite ends of the room and encourage her to walk back and forth. She obediently walks across the room countless times.

At one point, we even counted 11 perfect steps in a row, but the next day, it’s always back to crawling.

But one day last week, I complained to my friend that she STILL wasn’t walking yet, and she asked me why I wanted her to walk so badly. I realized that I didn’t really have an answer. Why do I want her to walk so badly when she obviously isn’t ready yet? Is it so I can finally tell my friends and family that she’s walking? Is it so that I can feel less anxious about the fact that her sister walked several months before her? Or so that I can brag to complete strangers that both of my children were early walkers?

Sometimes as parents we get so caught up in making sure that our kids don’t fall behind that we forget it’s actually okay to be behind. It’s okay to take your time and wait until you’re ready. It’s okay if you’re the last one out of all your friends to say goodbye to diapers or learn how to ride your bike. It’s okay if you still need your lovey at night or you’re nervous to put your head under the water at swim lessons. It’s okay if you’re taking a little longer than your sister to learn how to walk. It’s okay to excel in some areas and be just average in others. I want to remind myself and my children of this often, because if they don’t realize that it’s okay to be a little behind in some areas, what exactly are we teaching them? Perfection is an impossible and rather dangerous goal. I’d rather my children strive towards bettering themselves, even if they’ll never be the quickest or the smartest or the best.

So, in the future, when one of my daughters confides in me that she’s worried that she hasn’t yet mastered a particular skill, whether it be a corner kick or her multiplication facts or winged eye liner, I know exactly what I’m going to say: “Hey, that’s okay….you’ll get there!”

Because it is, and she will. In her own time.