A couple of weeks ago, my sister-in-law took her daughter to play at an open gym for the second time. This was a big step for her, getting out of the house and out of her comfort zone. She has two kids under the age of two (which makes getting out hard enough), but she is also starting over in a new city after being relocated by the Army. 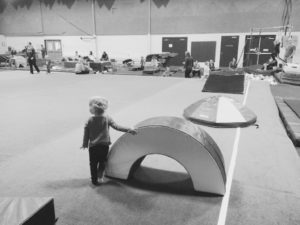 I remember how I wanted someone to meet up with and drink cold coffee while our kids learned how to play. I’m thankful the stars aligned and with the help of one friend, I became part of a pretty awesome mom tribe that keeps webbing out and growing. A group of moms who let their kids figure things out and understand that bumps and bruises are apart of kids playing together.

This is why I was taken aback by what happened to my sister in law on that day at the play gym. My niece discovered that a crawl through tube could also collapse if she pushed on it. Being almost two, this discovery warrants testing out a few times. Unfortunately, when she did, there was a child inside of the tube. Just as any good mom should, my sister jumped up, rushed over,  apologizing profusely to the mom of the child who had been in the collapsible tube. She also addressed the mom’s friend, who was by her side. Then she instructed her daughter to apologize to the child, at which point the mom and her friend scooped up their kids and WALKED AWAY.

As I was told this story, I was in disbelief. I was feeling protective of my sister-in-law’s heart, as well as my niece’s, which is what lead me to write this today:

Don’t be that mom.

You never know what kind of day the mom in front of you is having. Instead, as moms, let’s try something new:

The last bullet is one that I know is hard for some. By all means, you don’t have to invite someone into your home for an intimate playdate, but how easy is it to connect with someone and ask if they will be at the gym or the library the next week.

Ladies, we are on this journey of motherhood together. We are all doing our best!