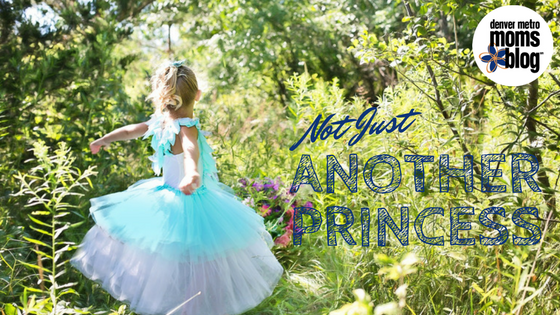 Every time I see the memes or any comments about encouraging our daughters to strive to be the Batman in a sea of princesses or an engineer instead of a princess, I smile and cringe at the same time. I get the message. I really do (trust me, I’m not about to start an “all princesses matter” campaign).

It just so happens that I am raising a little girl who is happy to swim in the sea of princesses, and I don’t believe this limits her in any way at all.

My daughter’s obsession with princesses is a recent development. It mostly centers around her wanting to wear her Anna costume and any dress more suited for church or Easter as her everyday attire. When she tells me she wants to wear a dress, I know (because she tells me so) that she does not mean any old dress in the closet. Actually, she doesn’t even want any new, very nice, and perfectly clean dress in her closet either. She wants the tutus, the poofy dresses, and the dresses with a little more pizzazz. She calls them princess dresses, and as soon as she puts them on she twirls around, waiting for me to gasp in awe.

For the most part I allow her to wear whatever she wants, as long as it’s weather appropriate. Our only argument so far happened the day she wanted to wear just a tutu (with no top) to school. Only then did I put my foot down. When I told my mother the story, she laughed as she reminded me of how I asked my dad to buy me a new dress for each day of school when I was little. I shuddered at the thought of repeating an outfit. (For the record, my parents did not go along with my ill advised plans). I guess the apple doesn’t fall far from the tree.

At the end of the day, I could care less what my daughter wears.

I suspect that in a year or more she will switch her attention elsewhere. That’s the nature of being young and carefree. I love watching her personality grow and seeing what new things catch her attention.

The other day, I was checking out at Michael’s and the woman checking me out mentioned how cute my daughter looked in her outfit. When I told her that my daughter thought she was a princess, she explained that she felt like some girls who had a princess attitude felt entitled and I should be careful. Her comment bothered me and it wasn’t until I left the store that I pinpointed why.

I encourage my daughter’s princess dreams because that is what she wants to be right now.

It’s about free will and personal preference. She loves to twirl around and feel the dress floating up as she moves in circles. She loves to pretend she is Ariel from The Little Mermaid or Princess Sofia or Belle from Beauty and the Beast. There is no sense of entitlement. She’s just a little girl getting lost in a story and in a world that she creates in her head. I hope she never loses her sense of wonder and imagination. I don’t want to insert my beliefs about how the world works on her aspirations.

As it turns out, she loves Batman, too.

She plays games where she is a superhero and she says, “super baby to the rescue!” with her fist raised high in the air. She runs with the boys at school and she can turn any story into a story about pooping and peeing with the best of them. She is sweet, kind, loving, and happy. Those are the only things I really care about. The rest is just extra.

I know that just because someone presents an alternate view does not mean they are discrediting the mainstream view. I am not advocating that we stop encouraging girls whose preferences don’t fall into the mainstream. I’m simply saying that maybe we shouldn’t place value or judgement on what a child’s preferences and dreams are. If my daughter tells me she wants to grow up and be an engineer one day, I will say, “cool. Let me know how you plan to pay for your degree.” If she tells me she wants to grow up and marry a beast one day, like Belle, I’ll say, “cool. Tell me when and where and whether or not you have a good health insurance plan.”

It’s less about the princess debate and more about supporting my daughter in every endeavor her little heart desires.

I’m proud of my tutu wearing, princess dreaming daughter. I think she is the most wonderful person I have ever met. And even though her desires happen to be very mainstream and “typical” right now, that doesn’t mean they are any less interesting or empowering.