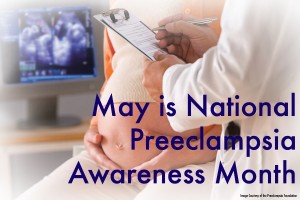 Before I had preeclampsia, my knowledge of the condition was based solely on what I saw on Downton Abbey (spoiler alert for those of you who have not watched the show – you should, it’s great!). One of the Crawley sisters, Sybil, was having symptoms of preeclampsia. Good Dr. Clarkson suggested that Sybil be moved to a hospital where she could be more closely monitored, but evil Dr. Whatever His Name Was disagreed and convinced Robert, Sybil’s father, that she would be fine.

Well, she was not fine, Dr. Whatever His Name Was! She developed full eclampsia and died and I was devastated!

So you can image what I might have felt when I was told, after a prenatal checkup, to head over to hospital because I had preeclampsia…

While I recognized that this was not 1920s, rural England, I was still very concerned about what this condition meant for my health and, most importantly, what it meant for the health of the twin boys I was carrying. Once I was admitted to the hospital, they immediately put me on bedrest and began closely monitoring me for more or worsening symptoms. I was 33 weeks and heartbroken. I had wanted to carry my boys to 36 weeks, at least.

I got them to 34 ½ weeks (very proud of that extra half!) and then the results came back that my protein numbers were finally too high and it was time. It was time to meet my boys. After a smoother than expected c-section and an excruciating 24-hours on magnesium sulfate to help keep me from seizing or having a stroke, I finally got to meet the absolute loves of my life, who I am so happy to say are strong and healthy! No long term effects for my boys or myself.

Throughout the whole ordeal, I did a little research on my condition and was astonished and saddened to find out that tens of thousands of mothers and hundreds of thousands of babies die every year from preeclampsia. These numbers come mostly from impoverished areas that have poor prenatal care and a lack of education, leading to an inability to detect the disorder in time.

Preeclampsia has several symptoms to watch out for, including “headaches, abdominal pain, shortness of breath or burning behind the sternum, nausea and vomiting, confusion, heightened state of anxiety and/or visual disturbances such as oversensitivity to light, blurred vision, seeing flashing spots or auras (source).”

Any of those symptoms sound like general pregnancy symptoms? That’s one of the biggest issues!

When women have headaches, they think it’s just a symptom of pregnancy. When they have “pain or burning” behind their sternum, they break out the tums. Confusion? Oh, that’s just “pregnancy brain!” If you’re visiting your doctor regularly, they can detect the most common factors of high blood pressure and proteins in the urine, but never hesitate to call the doctor if any “general pregnancy” symptom seems to get worse or comes on strongly or suddenly. You can never be too cautious when your health or the health of your baby is at stake.