Breastfeeding is a touchy subject that tends to ignite strong emotions in many moms.

It is very emotional for me for several reasons.  With my first child, I was essentially clueless.  I went to all the baby and parenting classes, but I was never told about breastfeeding.  I just assumed it would be easy; put baby to breast and BOOM, they latch and all goes well.

That was not the case for me with my first OR my second.  Sure, we got latched, or what I thought was latched.  Right off the bat, it was traumatic for me with sore, cracked, bleeding nipples, and a nurse that kept trying to get my baby to latch while she was screaming bloody murder. So, I decided to pump with my first until things got better.

Alas, things did not get better.

My first never latched again and yes- I tried and tried.

Thus began my exclusive-pumping journey of 13 months.  I pumped day and night, at home and at work. That was mostly all I did.  I never felt at ease pumping anywhere else, so my outings were pretty limited. We did a lot of neighborhood walking.

During this pumping journey, I experienced pretty awful postpartum depression, and I know that having to be tied to a pump and making sure I timed my life around it attributed greatly to my PPD and PPA.  I was a mess, to say the least.

With my second child,  I really wanted things to go differently.  He latched okay, right out of the womb, but then I soon realized his latch was not good.  I had sore, cracked nipples again.  All the Lactation Consultants kept telling me it shouldn’t hurt if the latch is right. (Which I found out later isn’t necessarily the case.)  I felt like I was doing something wrong if it hurt this bad.

Again, I felt the guilt and shame paired with failure.

It was happening again.

I began exclusively pumping again- I knew how to do that, at least.

I pumped and pumped, day and night. Breastfeeding was hard. 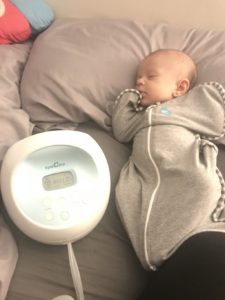 I didn’t want this to be my life again. Feeling myself slipping away into depression was really scary.  The lack of sleep and then having to wake up to pump was too much, but against my better judgment and what my body and brain were telling me, I kept pumping. I reduced the number of times I pumped per day, and I got different flanges for my pump, but nothing was helping me.  I had to somehow get the baby to sleep, pump while he was sleeping, and care for a 4-year-old all at the same time. Wearing thin, I knewsomething had to give. That something was pumping.

At about 8 weeks postpartum, I had saved enough breastmilk to get my son to 4 months exclusively with my milk.  After that, we would have to switch to formula; which I was okay with. It was around that same time that I began the process of drying up my milk.  It took 4 long weeks of drinking special teas, adhering to a taper schedule, and pumping less and less. 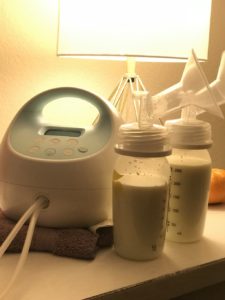 On October 28th, 2018 I did my final pump session.  It was emotional for me because I didn’t want the shame that a lot of moms get for willingly quitting breastfeeding their child.  After all, I was able to pump so much and save so much milk, Blessed with a great supply, why would someone like me quit?  I was worried that maybe I was making a mistake, but let’s be honest, mental stability is worth it for all involved. I knew that I was doing the right thing for all of us- my husband, my kids and myself.  If I was in deep, dark postpartum depression, and I wasn’t able to be the best mom and wife to my family that I could be.  Plus, I wanted to enjoy my baby, and not feel like all I did was pump and wash pump parts.

Breastfeeding is such a personal choice.  I did not make the decision of quitting breastfeeding lightly.  It took me weeks to finally decide to quit, and even when I did quit, I thought about starting up again.  I am glad to report that once I stopped pumping, my mood improved greatly, and I enjoyed my baby and my family.

I also know that fed is best, and a mentally healthy mom is best too, so quitting breastfeeding is what worked for our family.