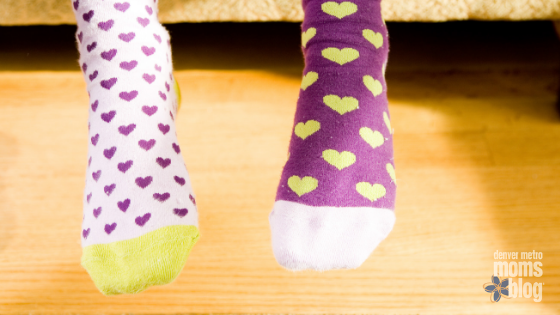 Every year on World Down Syndrome Day I text my friend, Lauren. She and I met when we were both very pregnant and working at Starbucks. The first time I saw her, she was in the back choking down a protein bar with a look on her face that I knew all too well. A look somewhere between pure disgust and utter starvation. I gave her a sympathetic smile and we became fast friends. In the days leading up to our due dates (I was two months ahead of her), when we weren’t making frappuccinos or wiping down tables, we discussed all things baby: cloth diapering, names, baby-wearing, and nurseries, just to name a few.

Rory was born five days late, and Lauren’s son, William, was born a month early, making them about one month apart. Lauren didn’t contact me until several months after William was born. She texted me and informed me that William was born with Down syndrome. She said that she and her husband were surprised by the diagnosis, but they are deeply in love with their son and beginning to embrace their new roles as special needs parents.

We covered so many topics during pregnancy, but Down syndrome never came up.

How should I react to this news that must have felt so life-changing for Lauren and her husband? What do you say to a parent who has had their dreams and visions for their child’s future altered by a diagnosis? I knew that no overly-used platitude would put a dent in the feelings they were just beginning to process. And yet, I had to say SOMETHING. I finally said that I couldn’t wait to meet him and told her how lucky they were to have each other. Little did I know that “lucky” would be an understatement.

Since then, we’ve seen each other every few months. Our kids have come to know one another, and I’ve come to learn a lot about what a Down syndrome diagnosis means for a new mom. With an extra chromosome comes extra doctors appointments and the need for various specialists, but also lots of extra smiles. Lauren was thrown into a world of speech therapists, occupational therapists, and unexpected medical issues, and she more than rose to the occasion. I am in awe of her and her dedication to her son and her determination to ensure that he receives every opportunity to live a happy, full, and successful life.  Lauren is William’s biggest fan, fiercest advocate, and he is her greatest joy. I can honestly say that Lauren is one of the best mothers I know and William is one of the happiest kids I know. The love they share leaves everyone in awe.

Honestly, I haven’t heard this derogatory word used since junior high, which is why I was so shocked to hear it during one of my group exercise classes last year. The instructor was showing us a complicated, awkward move that involved twisting your arm behind you while balancing on one leg. She demonstrated the move, wobbled a bit, and then proceeded to say that she “felt retarded” while doing it. I swear my jaw hit the floor, and I stood there mouth agape, in complete disbelief of what I had just heard. Did she really just use that word?!! I looked around the room to see if others had heard it, but everyone seemed to be hyper-focused on doing the exercise correctly.

I looked again at the instructor, waiting for her to show any sign of remorse over using such an ugly word, but she continued with the class. For the rest of the hour, I could think of nothing else except the r-word, how easily it had rolled off her tongue, and how desensitized the entire class seemed to it. I do not know this woman well, but I know her well enough to know that she is not an evil person. I know that she did not say this word to purposely offend anyone, but I was still angry. I was angry for Lauren who I know would be so hurt to hear that word used in a jestful manner. A word that represents so much pain and so many struggles used so lightly by someone who does not understand the weight this word carries. And I was angry for William who my family and I have come to love for his easy smile and his contagious sense of humor. His Down syndrome diagnosis does not give others the right to belittle or mock him.

I’m not usually a stickler for language, my children have heard some pretty colorful swear words come out of my mouth, but the “R-word” is one I just can’t get past.

When class was over, I considered speaking to the instructor about the R-word, how much it had hurt me, and how using it affects special needs families all over the world, promoting negative stereotypes for those with intellectual disabilities. I considered showing her a picture of William and explaining why this word should never be used in a joking manner. But, I’m ashamed to say that I didn’t. I hung around for a few extra minutes, but in the end, I just put on my shoes, cleaned my yoga mat, and walked to my car without saying a word. I’ve thought about that class every day since, and I am filled with regret. I am so angry at myself for not taking the opportunity to educate someone about Down syndrome and the joys and struggles it brings to a family. I am so angry at myself for not doing the right thing for William. So now, several months later, I am finally taking the opportunity to explain why the “R-word” is so hateful and why it should never be used flippantly.

A good rule of thumb is if you wouldn’t use the word in front of someone with special needs or their family, then don’t say it. Not ever.

So, today, on World Down Syndrome Day, I am asking you to help me spread the word to end the use of the “R-word.” Read more about the campaign to change the “R-word” to Respect. And the next time you think about using this word or hear someone else say it, please do what I couldn’t do that day at the gym, and educate the person about how people with intellectual disabilities are not less than. They are amazing and capable individuals who deserve our respect.

To Lauren and William, I am sorry I let you down, but it won’t happen again. Please know that I am “rocking my socks” today and thinking of how lucky we are to know you, and you may hear the occasional swear word, but the only R-word you’ll hear from me is “Respect.”

Denver Moms - March 29, 2020 0
We're going on an Easter Egg Hunt! Similar to the ‘bear hunts’ and ‘chalk walks’ we’ve seen popping up in neighborhoods all over America, our...