I’ll never forget the day my son turned to me and said, “Mom, did you know Joey has two moms?” Well, no, in fact (at that time) I did not. But let’s be real, lots of kids have two moms, so I asked a few questions.

And this mom loves it!

I’m no model citizen, but it amazes me (and not in a good way) that in 2018 anyone finds a conversation that includes any of the acronym LGBTQ to be an uncomfortable conversation.

Thankfully the world has become more accepting, but more accepting doesn’t necessarily mean easier. Despite all the progress we’ve made as a society, a same sex couple with kids may now be accepted but certainly isn’t “the norm,” likely won’t ever be. And for many of us, that creates an awkward conversation even though we don’t want it to.

I grew up in a Catholic family, a family where we were taught to love everyone. Everyone. We moved comfortably among people of all races, ages, and abilities, but it wasn’t until my retail days in college that I came face to face with my first gay coworker. He was an amazing guy, totally comfortable in his own skin, but more importantly to this story, he was totally comfortable in his same sex relationship – a pretty big deal in the early 90’s. Watching Royce and his partner was inspiring – they could have been an example to couples everywhere. And for me, an amazing introduction to the LGBTQ lifestyle and a “non-traditional” family.

It was those two that taught me love comes in many forms and I have no room to judge, but that was long before the days of motherhood, and while Royce and his husband equipped me to have many conversations, the “my classmate has two moms (or two dads)” wasn’t among them. Frankly it wasn’t something I had given much thought to at all… until I had to.

But even then, when that conversation did come up, it wasn’t awkward, not in this house. Not because I’m a great mom (far from it), but because two amazing, brave friends of mine are living their lives, living their story openly and honestly. And I’m lucky enough that our sons are the same age. 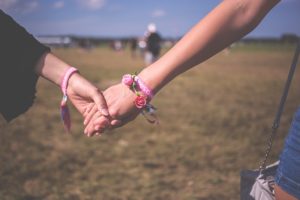 Do you know what that’s done? It has completely normalized their love for each other and their love for their kids for my youngest child. My 10-year-old has no qualms about Joey having two moms because Joey’s moms are just a part of the everyday fabric of our village.

When he mentions “Joey’s Mom,” it’s nothing weird when I ask which one. He just rolls his eyes and looks at me like I should already know who he’s talking about and then clarifies, the story rolling on without one second of awkwardness.

Denver Moms - March 29, 2020 0
Spring in the Denver metro area usually means sunshine, time to get outside to play with friends, and of course, enjoying the fantastic Easter...