Being the last baby in a family of three has its fair share of ups and downs. As our third child nears his first birthday, I’ve come to realize that there are certain luxuries that the third child misses out on. Undivided attention and alone time are both rarities. Unlike love, patience is finite. And when two other children are there to share that love and patience, mama’s fuse is inevitably shorter. However, on the flip side of that coin, there are two older siblings who provide unlimited entertainment at all times. Although, sometimes this entertainment looks more like getting colored on, poked, stepped on, or having toys ripped out of hands. There is also the privilege of already owning the most practical baby gear, the tried and trusted products, and parents who have been around the block a few times.

The following is a list of other struggles faced by the third child:

Being the third boy in the family ensures that everything this guy wears is stained and full of holes. And because he is 18 months behind his brother, we have some seasonal confusion as well. Hey, Christmas in July is a thing, right?

That reminds me, I should probably order another baby book from Amazon tonight. I’m only a year behind.

The older two have college savings accounts. We really didn’t intentionally leave this guy out- just another to-do list item that we haven’t yet gotten around to.

That whole idea of keeping screen time away or to a minimum for the first two years flies out the window when you have older children living in the home. Poor third child has seen more episodes of PJ Masks than I have.

Would you believe  it if I told you that my first born did not ingest a drop of sugar until his first birthday? 100% homemade, organic baby food was all he ate.  But the third child is a different story. It is impossible to keep big kid snacks separate and in the right hands, and so, Cheetos, fruit snacks and floor finds for the win! And who has time to make homemade baby food with two other young children running around? They all grow up to love sugar in the end.

Unlike my first born, our daily routines cannot be built around the third’s schedule. Older kids have swimming lessons, preschool, and play dates to get after. Those mommy and me story times and yoga classes I once loved are not meant for moms of multiples.

While the first born child received hawk-like attention at all times, with two eyes and three children, the helicopter parent has no choice but to veer slightly farther away. But that’s okay because the third child has two older siblings who are happy to supervise the shenanigans.

Or should I say, the closet. Yes, I know that sounds awful, but our third child sleeps in our closet. Our toddler is not as ready as we had hoped he would be to transition out of his crib and into the bunk bed with our oldest son; so therefore, the baby gets the next available living space- our closet. 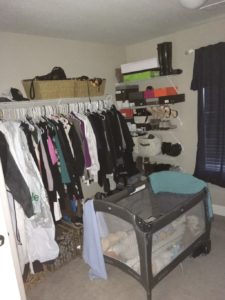 Despite these hardships, the third child also has the privilege of having parents who are a little more relaxed. Being the third child of the family may have its struggles, but it also means he gets loved and taken care of by his older siblings as well as his parents. And because he is the last baby we will raise, I’m holding onto those snuggles just a little longer. 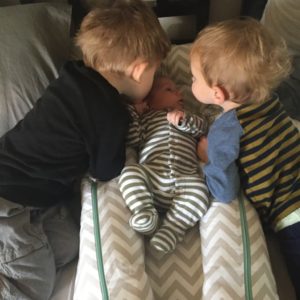