Your little one needs a tonsillectomy, now what?

How do you prepare for this? One of my daughters needed a tonsillectomy in March due to asthma and allergy-related symptoms, and I’ve created a list of tips and tricks to help other moms and dads who may find themselves in the same situation! Some I got from other mama’s and some are things I wish I would have known.

One to two weeks pre-tonsillectomy:

Make double-batch meals. Even though this surgery is minor, caring for a little one is still a full-time job. After surgery it seemed as though as soon as I was ready to start doing something, my daughter would need me. This neediness lasted about a week. To save yourself the dinner time hassle, start doubling your meals. Then freeze half for easy dinners the week after surgery.

Make sure to take a cup of iced water with you to keep in the car for the drive home. We were told it is important to take cold drinks quite often right after surgery, but we weren’t sent home with anything. I was glad I happened to think of this and and brought my insulated cup full of ice water for her. Avoid using straws for about a week, post recovery.

Allow your kiddo to take whatever makes them comfortable into surgery, just take a big tote bag to keep everything in. 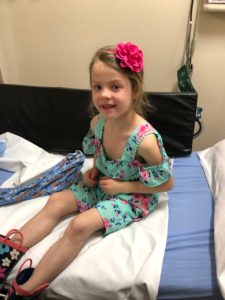 What I wish I would have known…

My daughter eats a pretty well-rounded diet, and doesn’t usually have a lot of added sugar. What did this mean? None of the sugary stuff sat well with her. Nor was it all what the doctor recommended to us on THE DAY OF SURGERY. I’m using all caps because it was THE DAY OF SURGERY that the doctor decided to tell me to avoid dairy, in order to minimize mucus production. We were also told to avoid anything red (aka, most jello) so as not to confuse it with blood.

As you prep foods for your kiddo to eat, think back to the baby years when you were mashing things up daily and didn’t think twice about it. Our little one loved avocados mashed up, blended up soups, squash, sweet potatoes. and mashed potatoes. Both the soup and potatoes could be made the week before and reheated as needed.

For cold items, she preferred popsicles over something she had to eat with a spoon. Organic coconut popsicles were her favorite. I also ended up making some with light colored juices. Apple was her favorite, as it wasn’t very tart and didn’t irritate her incisions. She also liked chewing on small bites of frozen organic mango. 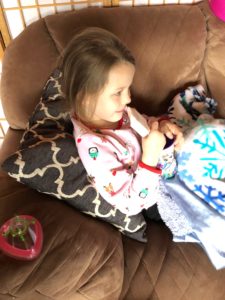 Mom hack: Give your kiddo a cup with the popsicle. Our daughter would often set it in the cup for a bit so it could soften up before eating it.

Also, be sure your medicine cabinet is stocked with children’s pain reliever before the tonsillectomy. We would alternate between ibuprofen and Tylenol. Use medicine as directed by your physician.

You’ve got this mama! Do you have any other questions about how my daughter’s tonsillectomy went? I’d be happy to answer them, just leave a comment below!