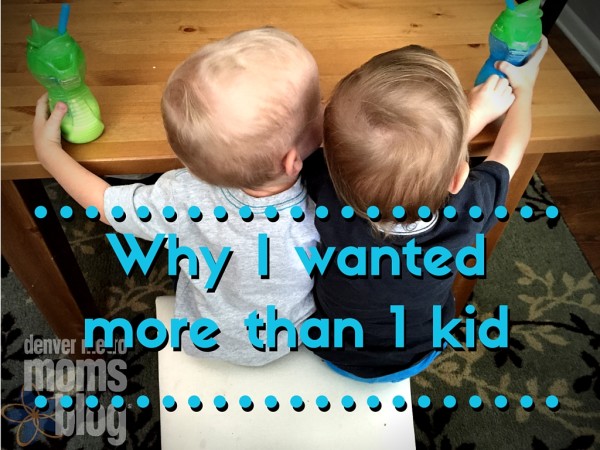 I’m an only child and I like to think that I turned out okay. Not selfish. Not narcissistic. Not bossy. Not any of those other negative things people think only children will end up being. I think that’s why I’ve had a few friends use me as an example when they were trying to decide if they should have another kid. “Look at Sara, she turned out fine,” I had one friend say to her husband, in defense of her position. “Yeah, but did you like being an only child?” her husband asked me.

This has always been a hard question for me to answer. Yes, I did enjoy being an only child. I enjoyed being the center of attention and not having to share everything all of the time, but there were moments that were also really lonely. I remember sitting in my closet playing with my He Man and Wonder Woman action figures (who had just joined forces to take on the evil foe, Skeletor), wishing that I had a brother or sister to play with me. I tried to get my step-brother to play with me when he lived with us for a little while, but he was a teen at that point, and he didn’t want some stupid 5-year-old around while he was trying to make out with his girlfriend. I might have felt differently if I had other kids in my neighborhood to play with or cousins who lived closer, but it was just me and my folks.

As I went through school, I developed some really close friendships and it became less of an issue. I had someone that was “as good as” a sister, but it still felt different than what I thought a sibling relationship would feel like. I saw my friend with her sister and it just seemed like there was a different connection between them. One that often came with conflict, sure, but one that also couldn’t be broken.

A longing for that type of relationship grew again as I moved into adulthood. Someone that I could talk to when friendships failed, when relationships ended. When my parents moved to St. Louis, I wished that I had a sibling to talk to that was also being thrust into adulthood, with no childhood-home safety net to catch them, but I didn’t and, again, it felt a little lonely. Even now, I’m jealous of my husband’s relationships with his siblings. They really rely on each other when they need to talk and truly enjoy having each other around. They laugh at the same stories and bring up the same inside jokes. They even have a song about doing the dishes. It’s really cute.

Seeing my husband and his siblings is what finally made me realize that I wanted to have more than one kid. I wanted them to have someone to grow up with. Play with. Fright with. Joke around with. Confide in. Someone to talk to who knew all the same stories. Someone they could call and say “Mom has straight up lost her mind, listen to this…” Someone who will always have their back.

I soon realized that this was going to be an easier said than done sort of situation, as we struggled to even get pregnant with one. Infertility can really mess with your plans. Jerk… I was ready and willing to just have one. If I could just have one! We were lucky though. “Third time’s the charm.” We had transferred two embryos in our third IVF and they both stuck! We got twins (or as I like to say BOGO Babies – buy one, get one free). I was thrilled. My one pregnancy (maybe the only pregnancy I’ll ever get to experience) was going to get me two little boys. Brothers.

Did you struggle with the decision to have one or more kiddos? What helped you finally decide?