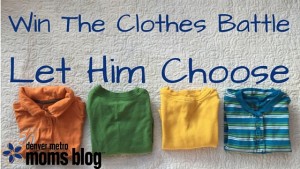 My family has been very fortunate in many ways. One of those is that we get loads of hand-me-down clothes from our friends (one of the advantages of having children later in life!). My 3-year-old has tons and tons of choices. In addition, I have some amazing in-laws (yes, I said it. This is another way I am fortunate. But I digress) and they love to buy my kids Broncos clothing (they are big fans and it is fun for them to indoctrinate the grandchildren)! 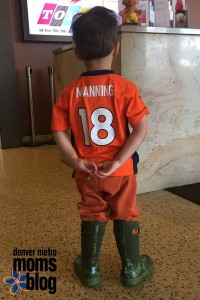 A few months ago I read this great post about only having a few items of clothing for your little girl, which can be mixed and matched and coordinated well. I remember thinking how great this would be to do with my 3-year-old’s clothes, too. We have some really great striped shirts, khaki pants, etc. that would be terrific together, allowing him to choose each day what he wanted to wear. Then I snapped back into reality and realized the key word here is “choose.”

If you look at what my 3-year-old picks just about every day, it consists of a Broncos jersey (including one that is too small, but he still insists on wearing), Broncos shirt, his (read in a 3-year-old yelling voice) “BRONCOS PANTS” (which are actually a pair of burnt orange sweatpants that have a football helmet on them, oh, and holes in both knees), a pair of plaid flannel pants that he calls his “comfy pants,” and a few assorted pants that just happen to be on top when he couldn’t find any of the other two pairs of pants mentioned above. Oh, and a Superman shirt that says it is a size 3T, but the sleeves are quarter-length on him.

So… while I would love to have a son who loved coordinating his really lovely striped shirts with solid color pants, this is not the battle I want to fight. Instead, what I love more is that he gets to pick what he wears and puts it on himself. Sometimes his underwear and pants are on backwards and shoes are on the wrong feet, and sometimes it take 30-minutes in the morning for him to get up, use the toilet and put his collage of Broncos clothes on, but that’s okay, because he is so proud of being able to do it all by himself. And I am also thankful because it means I can (theoretically, at least) do something else at the same time (assuming he doesn’t insist on not being left alone in his room while aforementioned dressing occurs). The only thing I really insist on is that, if it’s cold outside, he wear a long-sleeve shirt under the Broncos jersey so he doesn’t get cold. That is the only battle worth fighting. 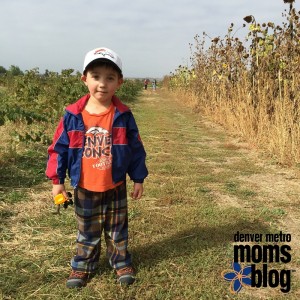 Would I let him wear this for a wedding? Not likely. But I did for school pictures, and that was one happy little boy. Especially when his baby brother wore a Broncos outfit, as well. Perhaps I love it so much because it reminds me of my favorite school photo of myself as a kid; wearing my dad’s old fraternity shirt with holes in it! The apple doesn’t fall far from the tree, I suppose.

Having an independent and happy little boy is quite a bit more important to me than one who actually looks like he dresses well. Even when he is affectionately called “Broncos boy” at preschool and my friends on Facebook ask me if he ever wears anything else. My response? “Not when he has a choice.” And “luckily” we have to do lots of laundry anyway with a baby in the house, so those Broncos clothes get lots of washing.

What do you do to help encourage your independent kid when it comes to choosing clothes and getting dressed?