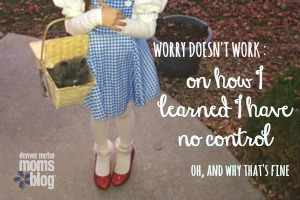 Being a brand new parent to a kid who is not brand new can be tough sometimes – a delicate little dance I’m learning as I go. I’m up for the challenge; I just have some years of experience to make up for. I’m not always sure I’m doing it right. And I worry, kind of a lot. But the more I stick with it, and the more time my girl and I spend together, the more I realize there are a lot of things I am not required to control. I know. This is hard for me, because I like to control things. Well, correction: I like to feel like I can control things. In actuality, I realize I control close to nothing. Thus, the delicate dance and all that.

I had discovered before, in my pre-mom life, that this is not a healthy way for me to live. I can easily take to worrying – constantly – and feeling like that somehow gives me control over the outcomes. If I can just think through the possibilities enough, I can… what? Be prepared? Have solutions at the ready? The thing is, I can no more control emotional outcomes by worrying about them than I can prevent skinned knees by carrying BandAids everywhere I go. This sort of control-by-worry is not productive and it’s relatively damaging, because worrying mostly just gets in the way of all the fun there is to be had in living. I got to where I could stave it off for myself; I learned to worry less. But then I got a 6 year old – and voila! I wanted to control things all over again. Until she showed me I didn’t have to.

Our girl loves The Wizard of Oz. She has loved it since she first saw the movie and asked, “Is Kansas black and white in real life?” (She has since been to Kansas, is a big fan, jokes about its colors.) And of course, she loves Dorothy and Glinda best. When she asked to be an elaborate (read: outside of my abilities) Glinda for Halloween this year, we eventually talked her down to Dorothy – arguing that she looked just like her (aaaaaand: you can buy it at a store). We sealed the deal with a pair of ruby slippers. It was not a hard sell.

Then recently, in one of the thousand weekly take-home flyers from school, I discovered Front and Center, a theater class for young kids. And what was the Spring play for the 6-9 age group? The Wizard of Oz. Naturally, I convinced my husband that our dramatic theatrical daughter was born for the stage, and when we presented the option to her, she wholeheartedly agreed. And thus began The Dorothy Campaign. The girl wanted nothing more than to be cast as Dorothy. We talked with her about other kids who might be older, or have more experience on the stage, blah blah blah. “We’ll be proud of you no matter what part you get,” we said. “Maybe a munchkin!” She heard it. She nodded agreeably. Then she asked if I might put her hair in two braids for her first class. “Not because I want to look like Dorothy,” she tried to convince me. “Just because I really like my hair that way.” Mmmhmm.

The day they got their parts in class, e was so excited she could hardly see straight, and I was secretly a nervous wreck. I showed up a half hour early to pick her up and waited anxiously for the troupe to come pouring out of the church basement they rehearse in. Finally the door swung open and e ran right over to me. “GUESS WHAT!” she excitedly proclaimed while I held my breath – “I’M THE COWARDLY LION!!” I waited for the sorrow, the disappointment, the agony, but it never came. She was, and is, thrilled and honored to be the Cowardly Lion. She has dedicated reams of printer paper to what her costume (hair and makeup, mostly) should look like for her role. She is running lines like an old pro. My little Dorothy look-alike is pleased as punch just to be a part of things.

As with most things I worry about, everything is fine – and I know I didn’t do anything to make it that way. But it made me think. I could spend the rest of our lives doing this, worrying her through every little thing she ever does. And it will change nothing other than that I will miss out on the honor and privilege it is to watch her grow and figure things out all by her tiny self. What I think it boils down to is this: We show up. We listen. We believe in our kids – we fuel their fire for the things they love, and prepare them as best we can for what might lie ahead. And then? We send them out, hope for the best, and show up for whatever happens.

And you know as well as I do – there will be sorrow, agony, and disappointment, too. Sometimes it won’t be fine. Sometimes, knees will get skinned. But we’ll be there for that, too. Because while worry tries to take away the possibility of pain, the point of carrying the BandAids isn’t to prevent injury, is it? The point of the BandAids is that we run to our kids, we get on the ground right beside them, hold them, and wipe their tears. We bandage their battle wounds. We meet them in their hurt and we sit with them in it. They don’t need us to lose sleep over the possibility of it. They just need us to be there.

And be there we will. With BandAids handy – just in case.