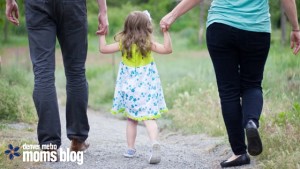 Our family of three recently attended an event where we saw quite a few people that we hadn’t seen in a while, and I got THE question – more than once.

“Do you just have one child?”
Yep. Just one.

People don’t seem to know how to respond when they hear that we have one child, especially given the fact that our daughter is almost three. There is usually an awkward pause as if they are hoping I will say more (like share some big news with them or give them a reason WHY we only have one child), and if I don’t embellish they go ahead and ask the OTHER question….

“Are you going to have more?”

Whenever these questions come up, I have to take a moment and really think about how I’m going to respond. It’s reminiscent of when people would ask us about having children early in our marriage before kids were even on our radar. I couldn’t believe how hasty people were to start asking such a personal question so early in our relationship. I thought the questions would stop after we actually took the plunge and committed to raising a human being, but I was wrong. Now everyone wants to know when the NEXT baby is going to come along.

A little over a year ago, we actually HAD come to the conclusion that we wanted to have another child, but it didn’t work out as planned. I had a tumultuous miscarriage experience. It was heartbreaking and earth shattering. I never anticipated what that sort of loss would feel like. I was crushed physically and emotionally and cried more tears than I ever thought possible. Taking this circumstance into consideration, it makes the “Do you just have one child?” and “Are you going to have more?” questions that much more difficult to answer.

Ultimately, my answer depends on the day I’m asked, the person who asks, and how much sleep I got the night before. Some that inquire may get the “Yep, just one!” response. Others might get more than they bargained for.

Even though we were genuinely excited and hopeful for our pregnancy that ended in miscarriage, we really struggled with even thinking about ever getting pregnant again. There was a strange feeling that somehow we would be disrespecting the lost pregnancy, as though we were replacing it somehow, but there was also a sense that we would be disregarding the desire we had for growing our family by choosing to just stick with having one child. It’s a complex roller coaster of emotions that’s hard to sort through, much less explain to someone else.

I know that these questions are usually asked with innocent and simply curious intentions. These questions almost seem to have become an expected part of playground small talk (or what I sometimes refer to as playground pick-up lines). ”How old is your child?” If said child is anywhere around 1 ½ years old or up, the next question is inevitable. “Do you just have the one?” If the answer is yes, get ready for it… “Are you going to have more?”

I will go ahead and admit that I’ve been the person that has asked the very questions that I’m referring to. It wasn’t until I was on the (grieving) receiving end that I really gave them much thought. I never understood how much these questions might be a trigger for someone until I experienced a pregnancy loss. It’s also important to remember that there are a number of reasons that people only have one child. Perhaps one child feels just right. Maybe finances are tight. There may have been struggles with infertility or miscarriage. A health crisis or other life crisis may be taking place. The list goes on.

I also acknowledge the fact that we could discuss the many pros and cons about having one child versus having multiple children, but we won’t go there today. This post has more to do with sensitivity, and I want to encourage us as mothers to think before we get too inquisitive. People will ultimately share what they want to share when the timing feels right.

Share with us what you say when you get “the question” in the comments below!